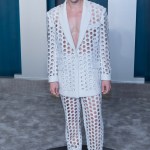 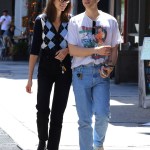 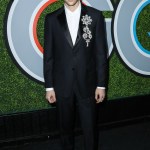 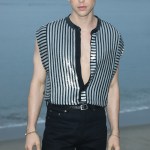 Tommy Dorfman is often side right by BFF Kaia Gerber’s side! Learn more about the married Atlanta native who shot to fame on ’13 Reasons Why.’

Tommy Dorfman, 28, is the best friend anyone could ask for the. The actor is often spotted with model Kaia Gerber, 18, and was recently spotted showing affection with friend Jacob Elordi, 23. In the sweet moment shared to Tommy’s Instagram account on Aug. 26, Tommy and Jacob could be seen sharing a friendly hug and kiss. Learn more about Kaia and Jacob’s close friend, who is best known for his role on Netflix’s 13 Reasons Why.

1. He’s BFFs with Kaia Gerber. Cindy Crawford‘s look-a-like daughter is often seen out-and-about with Tommy. The pair were recently seen stepping out for dinner in Los Angeles on July 31 — face masks on, of course — as they continue to be a part of each other’s “quarantine bubble.” Pre-quarantine, the pair also showed off their beach hangout in Jan. 2020! Posing in their swimsuits for a mirror selfie, Tommy captioned the pic “portrait of a respectful gay hand.”

2. He’s an actor. Tommy is best known for his role as Ryan Shaver on Netflix’s popular drama 13 Reasons Why alongside Brenda Song, Ross Butler, and Dylan Minnette. He also played Bobby in The CW’s Jane The Virgin and Nick on American Princess. Most recently, he is credited for appearing in Freeform’s mini-series Love in the Time of Corona. “We were filming at my house, which was a lot easier than I thought it was going to be just from a practical standpoint of rolling out of bed and getting to work,” Tommy said to HollywoodLife EXCLUSIVELY about the project. “No commute, which was great. It ended up being really intimate, and it was a space we’ve individually spent a lot of time in together just as friends,” he added.

3. He’s married. Tommy married husband Peter Zurkuhlen, 32, in Portland, Maine on Nov. 12, 2016 after getting engaged in April 2015. The pair reportedly met at a housewarming party held by mutual friends. Currently, Peter serves as the Chief of Staff at Los Angeles based tech company Get Help, which is focused on creating digital solutions for the health care industry. Tommy identified as non-binary in Nov. 2017.

4. He’s Andi Dorfman’s cousin. Tommy isn’t the only famous Dorfman! He’s a cousin of attorney Andi Dorfman, 33, who starred in the 10th season of The Bachelorette. She made an appearance in the Bachelor universe again during her runner-up Nick Viall‘s season and the pair recently made headlines for going on a jog back in June.

5. He’s from Atlanta. Tommy was born on May 13, 1992 in Atlanta, Georgia. After graduating high school, he packed his bags and headed to New York for college, where he enrolled at Fordham University. Tommy studied drama, earning his B.A. in Theatre Arts in 2015.