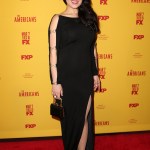 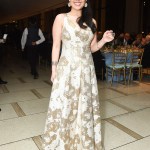 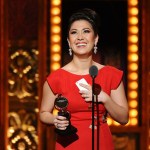 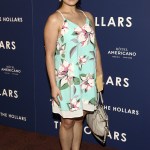 Ruthie Ann Miles, 37, has given birth! The Broadway star announced that she and her husband Jonathan Blumenstein welcomed daughter Hope Elizabeth in a post made Saturday, May 9. She did not include a date-of-birth, but posted a sweet photo of the little girls’ feet along with the caption “3 generations of April babies” — SEE THE PHOTO HERE. The happy news comes two years after her daughter 5-year-old daughter Abigail Joy was tragically killed in a car crash. Ruthie was hospitalized on March 5, 2018 after a white Volvo ran a red light in Park Slope, Brooklyn. The car struck Ruthie, her friend, Lauren Lew, and the women’s kids – Ruthie’s daughter, Abigail, 4, and 1-year-old Josh Lew. The children were killed, while the pregnant Ruthie was rushed to a medical facility. She was in a critical but stable condition, and tragically lost her unborn daughter two months later as a result of her injuries. The Tony Award winning actress shared the heartwarming news of her latest pregnancy earlier this Spring. Here’s 5 things to know about the actress.

1. She has welcomed a child 2 years after her daughter’s tragic death. The King and I star, who is married to Jonathan Blumenstein, announced her pregnancy news on Instagram, writing: “We are expecting another child this spring! Thank you especially to the many of you who supported us in the aftermath of the crash, continually lifted us up in prayer, and doused us with Love, encouraged us, let us be & grieve these two years…and now rejoice with us in this new life.” The Broadway community was quick to express their joy for the star, with Hamilton writer Lin-Manuel Miranda tweeting “Joyous news.” It certainly is!

2. The Americans grew up in both the US and Korea. Ruthie Ann Blumenstein (her stage name is Ruthie Ann Miles) was born in Arizona and lived as a young child in South Korea. “I grew up in Korea for the most part until I was 5 or 6 years old,” she told Flavorwire in 2016. “At home my mother only spoke Korean and most of my family spoke Korean. I had to work very quickly and very hard to break my accent.” After relocating and growing up in Hawaii, she enrolled in Southern Oregon University and completed her graduate studies at New York University.

3. Ruthie is a Tony-winning Broadway actress. After NYU, she appeared in a production of Two by Two, according to the Lincoln Center Theater website. The show’s composer, Richard Rodgers, would work with Ruthie again on The King and I. Before then, she would appear in Avenue Q, national tours of Sweeney Todd and Annie, and her breakout role as Imelda Marcos in Here Lies Love.

“Doing Imelda was harder than doing Lady Thiang,” said Ruthie. “Here Lies Love lasts only 90 minutes, but it was exhausting. I had to sing and dance in six-inch heels.” The endurance training of Here Lives Love would pay off, as her performance of Lady Thiang in the 2015 Broadway revival of The King and I would win her the Tony for Best Featured Actress in a Musical.

4. She’s also a television star. In addition to her time on Broadway, Ruthie Ann has appeared on The Americans. She played Korean immigrant Young-Hee, a standout character of Season 4. “[Playing her is] really freeing,” Ruthie Ann said. “Because in The King and I, my character doesn’t have the voice that the king has, but at the same time she has responsibilities and so she has to make things happen in a quiet way.”

“But with Young-Hee,” she added, “it’s very, very different. She doesn’t have all these huge responsibilities. She’s free to just be herself. She’s in America, where she can be an independent consultant for Mary Kay and make money for her kids. Her husband has a great job. She’s not restricted to being a stay-at-home mom. She has her fun — she makes friends, she goes to the movies. It’s very different from the character that I play eight times a week.”

5. Broadway’s heart broke over the news of her daughter’s death. A GoFundMe page was set up to help the family. The stars of Broadway, shocked over what happened, shared the link along with their condolences. “Heartsick for Ruthie and her family,” Lin-Manuel Miranda tweeted. “Sending love to you and your family,” Kristin Chenoweth added. “There are no words. Except you are loved.”

Heartsick for Ruthie and her family. https://t.co/T7Ox6y4BeH

@RuthieAnnMiles sending love to you and your family there are no words. Except you are loved.