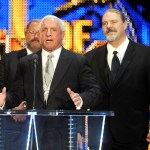 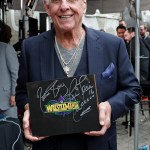 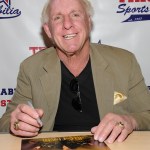 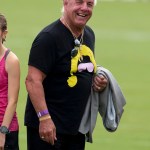 So scary! 70-year-old professional wrestling legend Ric Flair has been hospitalized in Atlanta following a medical emergency. We’ve got five things to know about the WWE legend who will undergo surgery.

The professional wrestling world was shaken to the core when on May 16 WWE icon Ric Flair was rushed to an Atlanta hospital with a “very serious” emergency first reported by TMZ Sports. His wife Wendy Barlow confirmed the news to HollywoodLife.com and revealed he will be undergoing surgery but his prognosis is good. “Due to ongoing health complications, Ric was taken to the hospital and is expected to undergo a procedure tomorrow morning, after which he expects to fully recover,” she told us in a statement. We’ve got five things to know about the blonde haired pro-wrestling legend.

1. Ric is widely regarded as one of the greatest wrestlers of all time.

His career spanned nearly 40 years, beginning as a pro with the American Wrestling Association in 1972. In 1974 he joined the  National Wrestling Alliance (NWA) and World Championship Wrestling (WCW) of which he became their first ever champion. He has been a World Champion in heavyweight wrestling a record number of 16 times. He is a two-time WWE Hall of Famer, with his first induction coming in 2008 for his individual career, then again in 2012 as part of The Four Horseman. He retired from the WWE in 2008

Ric got the moniker when he started calling himself the nickname in order to get a feud going with the original “Nature Boy” Buddy Rodgers in 1978, taking away his gimmick.

The 33-year-old is from Ric’s second marriage to Elizabeth Harrell. She performs in Smackdown under the name Charlotte Flair. She was born Ashley Elizabeth Fliehr in Charlotte, NC and Ric is a supportive  presence at her matches.

He has been married five times, and Wendy is his current wife. They married at a Florida resort on September 12, 2018. He had two children Megan and David with first wife Leslie Goodman. They divorced after 12 years of marriage and he had two children, Ashley and Reid with second wife Beth. Reid sadly passed away from a drug overdose in 2013. Ric married his third wife, fitness competitor Tiffany VanDemark in 2006 and fourth wife Jacqueline “Jackie” Beems in 2009.

He was placed in a medically induced coma in August  of 2017 after a bowel obstruction led to kidney failure and other medical issues. He was released from the hospital that September after spending nearly a month in the hospital. One of his first public appearances following the medical scare was on a Nov. 17 episode of SmackDown Live, where he surprised daughter Charlotte after she won the women’s championship.