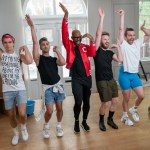 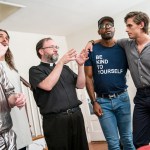 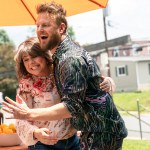 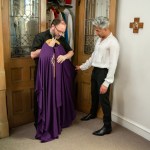 The fifth season of ‘Queer Eye’ is here and ready to fill fans’ lives with some much needed self-love and care! Before you binge through the entire feel-good show, here are five things to know about the season’s first hero, Noah Hepler.

Netflix‘s Queer Eye is back for its fifth season and just in time for Pride Month! This season, Jonathan Van Ness, Tan France, Bobby Berk, Antoni Porowski, and Karamo Brown are headed to the city of brotherly love: Philadelphia. Throughout the new batch of episodes, the five experts meet their new heroes, and their first of season five is such an inspiration. Noah Hepler, a gay pastor in the Fishtown community of Philadelphia goes through an inward and outward transformation that’s just as emotional as you’d expect. Here are five things to know about Noah Hepler!

1) Noah is the pastor of the Evangelical Lutheran Church of the Atonement. Noah has been the pastor of the ELCA for roughly five years. He was nominated by members of the church council in an effort to renew his confidence and self-esteem and make him a more vocal leader in the community. During the episode, the Fab Five help Noah prepare for the church’s milestone 125th anniversary, where Noah takes the time to share with his congregation his story and celebrate the next 125 years!

2) Noah came out later in life. Noah described for the Fab Five that one of the first person he came out to was his wife. Following his divorce, he found it incredibly difficult to date, especially due to his profession. “It can be a challenge to date as a pastor,” Noah shared with the crew during his interview. “But, also, I’m gay. I’ve struggled with my identity as a gay person.”

3) He was raised in a very religious community. Noah’s past with the church isn’t positive. He was brought up in a very homophobic, “fundamentalist, Baptist denomination,” one of Noah’s friends described. “I was taught that queer people were wrong and probably going to hell,” Noah explained. In spite of those negative memories, Noah devoted his life to his faith, studying it before he and his wife divorced and he moved to Philadelphia to start a new chapter.

4) Noah grew up in North Carolina. Noah’s childhood was spent in Winston-Salem, NC. When working on his culinary skills with Antoni, Noah describes how one of his favorite meals growing up was pinto beans and corn bread — a dish that Noah eventually makes for a group of LGBTQIA+ community members and later invites to his church’s 125th anniversary celebration.

5) He’s a cat person! Noah is the proud owner of two cats named Thor and Satine. Although they are a bit reclusive, fans of QE can quickly spot them when Noah takes the Fab Five on a tour of his home. Thor is a black cat and Satine has a beautiful mix of orange and black fur.