“Our beloved friend Mark Lanegan passed away this morning at his home in Killarney, Ireland,” a statement issued Tuesday (Feb. 22) from Mark’s official Twitter account reads. Mark, 57, was the lead singer of Screaming Trees, a band formed in the mid-1980s and became early grunge pioneers. The statement referred to him as “a beloved singer, songwriter, author, and musician” and that he’s survived “by his wife, Shelley. No other information is available at this time. The family asks everyone to respect their privacy at this time.”

Our beloved friend Mark Lanegan passed away this morning at his home in Killarney, Ireland.  A beloved singer, songwriter, author and musician he was 57 and is survived by his wife Shelley.  No other information is available at this time. We ask Please respect the family privacy

The music world quickly mourned Mark. Peter Hook of Joy Division/New Order tweeted that Mark was “a lovely man. He led a wild life that some of us could only dream of. He leaves us with fantastic words and music! Thank god that through all of that he will live forever. RIP Mark. Sleep well.” Tim Burgess of The Charlatans tweeted, “Oh no. Terrible news that Mark Lanegan has left us. Safe travels man – you’ll be missed.” “Hearing about Mark Lanegan passing away has properly stopped me in my tracks,” tweeted Badly Drawn Boy, adding, “I’m absolutely gutted. Met him on a couple of occasions, and I was nervous because I loved him so much. He was a perfect gentleman, really kind. One of THE great singers of the last 30 years. So sad.” As the world reacts to the loss of this voice, here’s what you need to know. 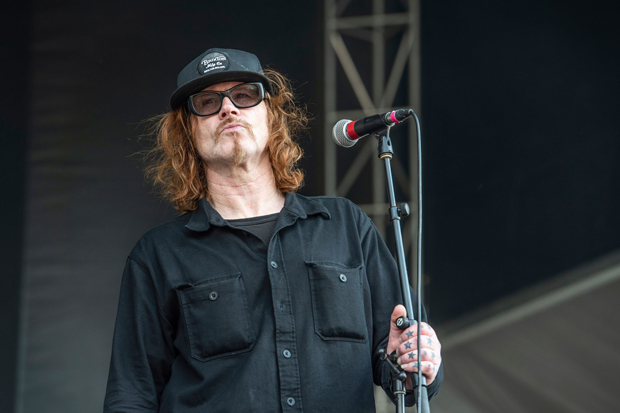 Mark Lanegan was born in Ellensburg, Washington, USA, on Nov. 25, 1964, per his Bio on Apple Music. He grew up in “a dysfunctional household and developed a powerful appetite for liquor and drugs in his teens that led to scrapes with the law,” per the Bio, which would see him become friends with bassist Van Connor. With Mark Pickerel and Gary Lee Conner, the four formed The Screaming Trees in 1984.

2. Most GenXers Will Remember Him For ‘Nearly Lost You.’

The Screaming Trees released their debut album, Clairvoyance, in 1986. I don’t know what you’d call them, but they were probably grunge, at least by fashion. They were wearing flannel independently of us,” Kim Thayil, guitarist for Soundgarden, told Rolling Stone in 2019 when listing Clairvoyance as one of his favorite grunge albums. “Their influence and impact on us and on Seattle was definitely significant.”

“I like Clairvoyance for the song ‘Clairvoyance,’ but my favorite song on there is probably ‘I See Stars’ followed by ‘Orange Airplane,’” added Kim. “After this album, they kind of fattened up their sound.” While the first album was influenced by psychedelic and hard rock, later releases incorporated the sonic elements that would define the alternative sound of the 1990s.

The group was six albums deep into their career when they experienced their biggest burst of success. The inclusion of “Nearly Lost You” on the Singles soundtrack – a high-water mark for GenXers – resulted in the song hitting No. 12 on the U.S. Mainstream Rock charts, and No. 5 on the then-Modern Rock tracks chart. It became a staple of alternative radio.

Related: Nolan Neal: 5 Things To Know About ‘AGT’ & ‘The Voice’ Contestant Dead At 41

“It’s kind of like looking back at grade school,” he told Consequence in 2021. “I definitely have fond memories, and it’s really how I learned to sing — through trial and error, with those guys.

3. He Was In Bands With Kurt Cobain & Dave Grohl…

Screaming Trees released one more album following the “Nearly Lost You” bump — 1996’s Dust. In 2000, the group announced its breakup. Mark’s non-Screaming Trees work includes a stint in Queens of the Stone Age. While he was never an official member, his vocals can be heard on Rated R, Songs For The Deaf, and Lullabies to Paralyze. This means that Mark’s vocals are on an album (Songs for the Deaf) that features Dave Grohl’s drumming.

This isn’t the only time that Mark worked with a member of Nirvana. He, Kurt Cobain, and Nirvana bassist Krist Novoselic teamed with Screaming Trees’ Mark Pickerel to form Jury, a side group brought together by the four members’ love for blues, particularly the music of Lead Belly. While the group didn’t last long enough to record an E.P., Nirvana covered Leady Belly’s “Where Did You Sleep Last Night?” during their Unplugged concert.

Mark also used a cover of “Where Did You Sleep Last Night?” – featuring Kurt and Krist – to launch his solo career. His debut album, 1990’s The Winding Sheet. In the following three decades, he would release eleven more solo albums, with the most recent being 2020’s Straight Songs of Sorrow. He would also write a handful of books, including 2021’s Devil in a Coma, a memoir of his battle with COVID-19.

In March 2021, Mark contracted CVOVID-19. “I just woke up one day totally deaf,” he told Consequence about the infection. He walked into his kitchen to pour himself some coffee but fell to the floor with cracked ribs and was unable to breathe. He was rushed to Kerry Hospital, where he slipped in and out of a coma. In December 2021, he told Consequence that he was feeling “A million times better — I finally turned the corner. But it took a really long time. It was crazy.”

“There’s some residuals,” he added. “Whatever I had, it attacks places where there was trauma in the body previous times. And I had a number of accidents over the course of my life. I have a chronically f**ked up knee which still gives me some pain. That was one of the strange things about the thing — it went for any place where you were injured or had something happen before.”