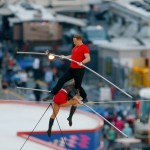 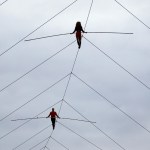 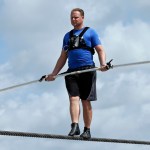 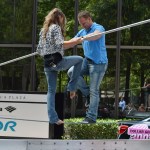 Tightrope walker Lijana Wallenda will be making her epic comeback following a 2017 accident when she and her brother Nik attempt to cross Times Square from 25 stories up. Here’s five things to know about her.

Lijana Wallenda is part of the famed Wallenda tight rope and aerialist family and will be joining her brother Nik, 40, for his next epic feat. On Sunday, June 23, the siblings will each start from the 25th floors of 1 Times Square and 2 Times Square in New York City and walk a tightrope until they meet in the middle, where Lijana will crouch down and Nik will step over her as they then continue to their respective sides. They’ll be over 1,000 feet off the ground and ABC will air the daring feat on the live special Highwire Live. We’ve got five things to know about Lijana ahead of the epic attempt.

1. Liijana comes from a long family lineage of aerialists.

Her great grandfather Karl Wallenda made tightrope walking famous in the 1920’s with his family troupe The Flying Wallendas. He would walk highlines without a net and popularized the daring feat at circuses.

She and her family members were practicing the eight man pyramid for Circus Sarasota at their home base in Florida when it began to collapse. She fell 30 feet and “broke every bone in my face” and slipped into a coma. She ended up needing to have her jaw wired shut for over a month as a result. She told Good Morning America ahead of the Times Square walk that “I broke a rib, punctured my right ear canal, broke clear through my left humerus, I broke my left calcaneus,” she said. “But the big one was every bone in my face.”

This will be her first major tightrope act since the devastating accident. She and her brother Nik will both be wearing safety harnesses should either of them slip as it’s being aired live on ABC.

4. Lijana has been training in adverse conditions for the Times Square walk.

She and Nik told GMA that they’ve been walking on tightropes while wind machines blast them with 90 mph winds and hoses that blast water to mimic torrential rain. Hopefully they’ll have good weather and the training won’d need to come in handy.

“I’m just a little nervous because the wire moves more than anything I’ve ever been on,” she explained to GMA. Nik added, “There is that physical aspect that she hasn’t been on the wire for a long time, so that’s a major concern. I have concerns that when she gets up here I don’t know that she’ll take that first step. I think she will, our family blood says never give up, continue on,” he added.