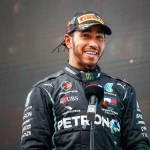 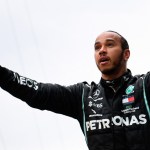 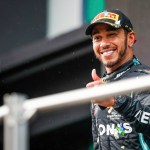 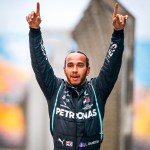 Seven time Formula One world champion racer Lewis Hamilton has it all. Good looks, a brilliant career, and plenty of famous friends. We’ve got five things to know about the dashing Brit.

Lewis Hamilton made history on Nov. 15 with his victory in the Turkish Grand Prix. He became a seven-time Formula One world champion, tying Michael Schumacher‘s all-time record. Along with being widely regarded as one of the greatest racers of all time, Lewis, 35, has had a high-profile love life and been outspoken on many social justice issues that his fellow racers have remained silent on.

After his Sunday victory, he got on his team’s radio and tearfully said, “That’s for all the kids out there who dream the impossible. You can do it too, man! I believe in you guys.” Lewis is one of the rare F-1 racers to come from a working class background and not a wealthy family. His dad worked four jobs and remortgaged his house three-times to get Lewis’ career in karting off the ground as a child, where he was picked up by the McLaren driver development program at age 13. We’ve got five fun facts to know about Lewis.

1. Lewis is English and of mixed-race background. Born outside of London, Lewis’ father Anthony is Black while his mother Carmen is white. Lewis self-identifies as Black. He is Formula One’s first and only Black world champion. “It is no secret that I have walked this sport alone as the only person of color here,” he told reporters after his Turkish Grand Prix win. “You can create your own path and that is what I have been able to do, and it has been so tough. Tough doesn’t even describe how hard it has been.”

2. Lewis has dated some very famous ladies. His longest high-profile relationship was with former Pussycat Dolls singer Nicole Scherzinger on and off from 2007-2015. After their breakup, he has been linked to Rihanna, model Barbara Palvin, singer Rita Ora and rapper Nicki Minaj.

4. Lewis is vegan. In 2017 he told the BBC that, “The cruelty is horrible and I don’t necessarily want to support that and I want to live a healthier life,” as to why he stopped eating meat. In 2019 he invested in meat-free, plant based restaurant chain in England called Neat Burger, which hopes to expand across Europe.

5. Lewis supports Black Lives Matter and other social causes. After George Floyd‘s death while in custody of a Minneapolis police officer in May 2020, Lewis spoke out against Formula One for not supporting BLM. He wrote on Instagram, “I see those of you who are staying silent, some of you the biggest of stars yet you stay silent in the midst of injustice. Not a sign from anybody in my industry which of course is a white dominated sport. I’m one of the only people of color there yet I stand alone.” In a Nov. 3 IG post, he wrote, “As we continue through the year I can definitely feel the slowing in momentum of BLM. I won’t stop trying to push for change. Awareness is where that starts so you’ll see me there each weekend representing,” next to a photo of Lewis wearing a t-shirt supporting BLM, women’s rights, gay marriage and a pro-immigration stance.