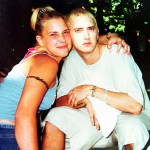 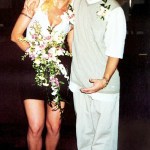 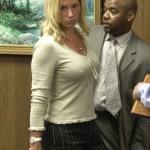 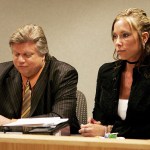 Eminem fans know her only by one name – ‘Kim’ – but the rapper’s former love and mother of Hailie Jade is Kim Scott, and this is what you need to know.

In the lore of Eminem, there have really been two women who have constantly appeared in both his art and his personal life: his daughter, Hailie Jade, and her mother (and Eminem’s ex) Kim Scott. Ever since his Slim Shady EP in 1997, Kim has been a muse – for better or for worse – to rapper born Marshall Mathers, but what do fans and the public know about the woman at the heart of so many of his songs? For those still wondering, “who is Eminem’s ex-wife?” here’s what you need to know.

Kim Ann Scott – reportedly born on January 9, 1975, in Warren, Michigan – seemingly began her lifelong association with Eminem when she was a teenager. Eminem met Kim at a house party when he was 15, and she was 13, per Complex. During this first encounter, Eminem decided to mimic one of his hip-hop influences by taking off his shirt and rapping to LL Cool J’s “I’m Bad.” From there, it was love.

Kim and Eminem Were Married – Twice.

Eminem and Kim were married in 1999, but this matrimony only lasted ten months. He filed for divorce in August 2000, according to Rolling Stone, right as his career was taking off, and judging by the songs he wrote about her (more on that later), it seemed this was for the best. However, in 2006, Eminem and Kim reconciled and remarried at the start of 2006. This time, the marriage only lasted three months. Eminem filed for divorce in April 2006, 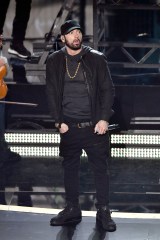 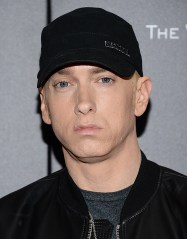 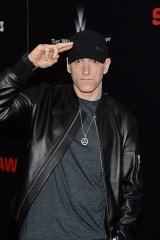 “I would rather have a baby through my penis than get married again,” he told Rolling Stone in 2002. “I can’t take what I went through last year. I don’t ever want to experience that again.”

The only other constant female presence in Eminem’s art is his daughter, Hailie Jade. Eminem and Kim welcomed their only daughter on December 25, 1999. In 2020, Eminem praised his daughter on an episode of Mike Tyson’s podcast, Hot Boxin’. “No babies, she has a boyfriend, but she’s doing good,” he said. “She made me proud for sure. She’s graduated from college. 3.9 [GPA]. It’s crazy.”

As of 2021, Hailie is a prominent figure on social media. She has 2.1 million Instagram followers, and her photos get Likes in the tens of hundreds of thousands.

Hailey also gave birth to Whitney Scott Mathers in 2002 from a relationship with another man. Eminem later adopted Whitney, as well as Alaina Marie, the daughter of Kim’s late twin sister, Dawn Scott.

Eminem Has Written Many Songs About Kim.

Eminem kicked off his career with lyrics about graphic violence. Arguably, his biggest song, “Stan,” is about an obsessed fan who ultimately mimics his hero – “Hey, Slim, that’s my girlfriend screamin’ in the trunk / But I didn’t slit her throat, I just tied her up—see? I ain’t like you,” the ‘Stan’ writes to Em, referencing “’97 Bonnie & Clyde,” a track from 1999’s The Slim Shady LP.

On that song, Eminem raps to his (fictional) toddler daughter, “C’mon Hai-Hai, we goin’ to the beach / Grab a couple of toys and let Dada strap you in the car seat / Oh, where’s Mama? She’s takin’ a little nap in the trunk / Oh, that smell? Dada must’ve run over a skunk.”

“Kim,” also from The Marshall Mathers LP, the same album with “Stan,” acts as a prequel to “’97 Bonnie & Clyde” and is a graphic depiction of a man killing his wife. From there, references to Kim would appear throughout Eminem’s discography. The website Gunaxim put together a list in 2010, though a decade later, it’s incomplete. However, at one glance —  ‘Till I Collapse,” “Soldier,” “Say Goodbye To Hollywood,” “Mockingbird,” and “When I’m Gone”  — and one can see how Kim has been Eminem’s muse throughout his career.

Eminem ultimately apologized to Kim in 2017 on the song “Bad Husband,” per Genius. “You hit me once and that I would use / To continue the pattern of abuse / Why did I punch back? Girls, your dad is a scumbag, I’m confused.”

‘Cause I loved you, but I hated that me / And I don’t wanna see that side again / But I’m sorry, Kim / More than you could ever comprehend,” he raps later in the track. “ Leaving you was fucking harder than / Sawing off a fucking body limb.”

Kim Has Struggled With Depression.

In October 2015, according to Fox 2 Detroit, Kim was involved in a one-car crash at 23 Mile and Card roads in Macomb County. She struck a utility pole, and her SUV landed upside down in a ditch. At first, it was reported to be a case of DUI, but the court records were sealed. In May 2016, she called into the Mojo In The Morning show to say that the incident was actually a suicide attempt.

“After I realized how much drama it was causing, I willingly unsealed the files so everybody could know my personal business yet again,” she said. “I sat at the end of the road. I knew no one else, but myself would get hurt. Yes, I drank. I took pills, and I hit the gas and aimed for the pole.” She confirmed that this was a suicide attempt, and “that’s why those records were sealed. There was medical information in there. It had nothing to do with the rest of the case.”

Kim said she had been clean for a decade, but she struggles with being in the public eye. She also says she deals with depression, and the loss of her twin sister – dead from an alleged drug overdose – was too much to bear. “Honestly, I was starting to do better,” she said. “After the death of my sister I had to go look at her dead in that trailer and just everything that was being said about her. It just hurts and now this.” She also said that Eminem had been “very supportive” of her. “We are very close friends; we are just trying to raise our kids together and make it as normal for them as possible.”