Hailie Jade Mathers rocked a playful bikini during her latest summer outing. The social media personality, 25, and daughter of rapper Eminem stunned in a neon green bikini top and multi-colored bottoms while on a boat in a new post shared on Tuesday, Aug. 10. She finished the look with stylish sunglasses and some necklaces.

The pics come after Hailie showed off her festival wear at this year’s Lollapalooza music festival in Chicago just last week. In a post that chronicled her various outfits from the four-day festivities, Hailie rocked a multi-colored bandeau top in green and cream and paired the look with mom jeans.

The social media personality followed up with another post from the festival that showed off her love for a good crop bra. In the post shared over the weekend, Hailie rocked a black bra crop and denim shorts — this time completing the look with stylish white go-go cowgirl boots. 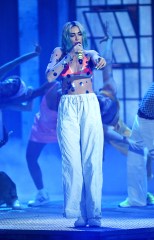 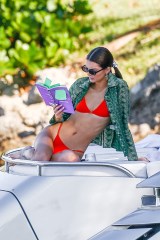 While stylish, the shoes were apparently not very comfortable, as Haile captioned the post, “these boots were(n’t) made for walkin’ … so i’m just gonna sit here for a minute.”

While he has long remained relatively tight-lipped about his family — apart from the references in his music, including “Hailie’s Song” — Eminem recently offered some rare comments about Hailie following her graduation from Michigan State University in 2018. While on Mike Tyson’s podcast Hotboxin’ with Mike Tyson last March, the “Lose Yourself” rapper gushed about how “proud” he was of Hailie for finishing her studies.

“No babies, just a boyfriend,” Eminem said when asked if Hailie had children of her own. “She’s doing good. She’s made me proud for sure.” He also divulged to the former boxer that his daughter graduated with a 3.9 GPA. The rapper also gushed about his nieces Alaina and Whitney, whom he adopted with ex-wife Kimberly Anne Scott. “I have a niece that I have helped raised, too, [she’s] pretty much like a daughter to me, and she is 26. And then I have a younger one that’s 17 now.”

He called raising the girls his greatest accomplishment. “When I think about my accomplishments like that’s probably the thing that I’m the most proud of, you know, is that — is being able to raise kids,” the rapper continued, explaining that he tries to keep his children “grounded” despite their famous parents.