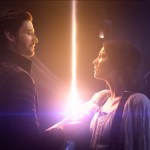 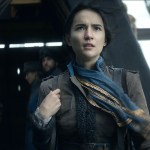 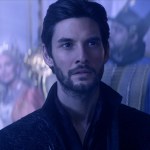 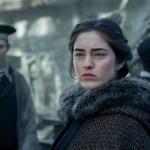 Jessie Mei Li stars as Alina Starkov in the new Netflix series ‘Shadow and Bone.’ Here’s what you need to know about this rising star.

Shadow and Bone is one of the most highly-anticipated shows of 2021. The Netflix series, which drops April 23, is based Leigh Bardugo’s bestselling Grishaverse novels. Jessie Mei Li stars as the beloved Alina Starkov, whose extraordinary power could set her country free.

Jessie is truly a star on the rise. The 25-year-old’s acting prowess is showcased in the Netflix series. From Jessie’s past projects to her thoughts on Alina being mixed-race, HollywoodLife has rounded up 5 key things to know about Shadow and Bone’s breakout star.

Before Shadow and Bone, Jessie made her stage debut in the production of All About Eve in 2019. She starred alongside Gillian Anderson and Lily James. She was then cast in Edgar Wright’s Last Night In Soho, which filmed in 2020. The film is set to be released on October 22, 2021. Jessie appeared in an episode of Shortflix in 2018 and Locked Up Abroad in 2019.

2. Jessie didn’t always want to be an actor.

Jessie attended Reigate College and initially studied languages. She dropped out of university and began working with special needs children. Jessie eventually started exploring acting, which led to her breakout role. Despite the impending fame that will come with the release of Shadow and Bone, Jessie isn’t interested in popularity. “I don’t want to be famous. I don’t want to be a celebrity,” she told The Hollywood Reporter. “Whatever people say about me on the internet, good or bad, you’ve got to take it with a pinch of salt and think, ‘This is their interpretation of who I am.'”

Jessie’s preferred pronouns — “she/they” — are noted on her Instagram page. Jessie also includes “woman/person” in her Instagram bio. “I’m pretty flexible she, they, whichever your preference is. I’m both,” Jessie revealed to Seventeen. The Shadow and Bone star had a “complex” relationship with gender growing up and finally spoke to a friend who was having similar feelings. “I was thinking, ‘Well, am I completely non-binary? What am I?’ And I realized, actually I am who I am,” Jessie told W magazine. “I’m first and foremost, just a human being who likes what I like. I am also a woman, and that’s how the world has viewed me the majority of my life. I’m proud of that as well, and I can identify with both those things. I think that’s the thing with your pronouns and gender identity, you can just be who you are. That was so freeing to me to understand that I could have multiple pronouns and some friends will refer to me as they, and some will refer to me as she, and that’s okay … I’m proud to be gender non-conforming. I’m proud of all my friends who are the same. Hopefully, as time goes on, it becomes something that more and more people feel they can talk about.”

4. Jessie was thrilled the ‘Shadow & Bone’ writers made Alina mixed-race.

In the show, Alina is half-Ravkan and half-Shu. Ravkan is inspired by Russia. Shu Han was inspired by China and Mongolia. In the books, Alina is described as “pale,” but her race is never clearly stated. “I was so thrilled that they made this decision, and yeah, I was able to bring my own experiences,” Jessie told The Beat. “For lots of people [who are] mixed race or first-generation immigrants, you spend so much of your life not feeling like you belong anywhere. I certainly grew up in a predominantly white area, and I was always ‘the Chinese one’ to my white friends. But to my Asian friends and family, I was very English, and you never really feel like you belong anywhere.”

5. Jessie was diagnosed with ADHD.

The Shadow and Bone star was diagnosed with ADHD during lockdown after she couldn’t sit still for hair and makeup on the set of the show. “It completely changed how I viewed loads of things in my life and made me really reconsider the way I think about things,” Jessie told The Guardian about the diagnosis. “In the past, I was constantly late for things and forgetting things and losing things, and I remember as a teenager, my mum being like, ‘Oh, you just need to be more careful.’ And I’m like, ‘I am really careful.’ I felt like no one believed me ever.”