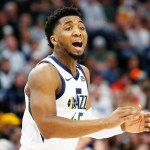 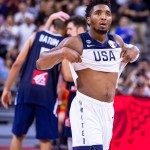 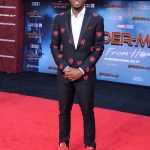 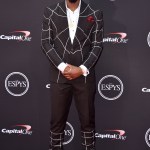 UPDATE: 3/12/220, 1:21 pm ET — Donovan Mitchell confirms he tested positive for coronavirus in a lengthy post on Instagram, seen here. “I am going to keep following the advice of our medical staff and hope that we can all come together and be there for each other and our neighbors who need our help,” he included a long passage on March 12, thanking those who’ve reached out. Donovan also addressed the seriousness of coronavirus outbreak writing, “Hopefully people can continue to educate themselves and realize that they need to behave responsibly both for their own health and for the well being of those around them.”

Donovan Mitchell has tested positive for coronavirus, sources told ESPN‘s Adrian Wojnarowski. on Thursday morning. The Utah Jazz point guard, 23, is now the second player on the team to test positive for contracting the virus, according to the report. Donovan, the Jazz and the NBA have not yet publicly addressed the report.

Utah’s center, Rudy Gobert was the first to test positive for coronavirus on March 11 — 15 minutes before tipoff at the Oklahoma City Thunder’s home game against the Jazz. The center and reigning NBA Defensive Player of the Year, was not at the arena at the time, and is now in isolation. Until new developments are released, here’s five things to know about Donovan.

1. Donovan Mitchell is an American professional basketball player for the Utah Jazz. — The athlete, who was born on September 7, 1996, played college basketball for the Louisville Cardinals from 2015-2017. He entered the 2017 NBA Draft in the midst of his sophomore year.  Donovan was selected 13 overall by the Denver Nuggets, but was traded on draft night to the Utah Jazz. During his rookie season, Mitchell was named to the NBA All-Rookie First Team and won the 2018 Slam Dunk Contest. He was in a head-to-head race against Ben Simmons for Rookie of the Year, but was beat out by the Philadelphia 76ers point guard. Donovan was named an NBA All-Star for the first time in 2020.

2. He’s a family man. — Donovan is very public about his close relationship with his mother, Nicole Mitchell and sister, Jordan Mitchell, who is also an athlete. Jordan was also part of Donovan’s dunk, which won him the 2018 NBA Slam Dunk Contest at the Staples Center in Los Angeles. He later spoke about the importance of her involvement in the big moment. “She’s a trooper… She’s driven in the car 14 hours with my mom to Louisville and watch the game and then drove back in the same night,” he told Kyle Goon of the Salt Lake Tribune. “To have a sister that’s dedicated to doing that, to bring her out here for all-Star Weekend… I’m glad I could give this to her and have her be a part of it.

SENIOR DAY 12!!! CONGRATS @jordan.mitchh IM SO PROUD OF YOU! SORRY I COULDNT BE THERE FOR THIS BUT THANK YOU FOR ALWAYS BEING THERE FOR ME EVEN WHEN YOUR A LITTLE TIRED 😂😂😂❤️❤️❤️ #12 #FOE

3. Donovan’s nickname on the court is “Spida.” — Because of his style of play and personality, the 6-3 point guard has been dubbed as “Spida Mitchell,” which would later help make him a household name.

4. He has a massive deal with Adidas. — In June 2019, the brand formally announced the launch of Donovan’s signature shoe, the D.O.N. Issue #1, in conjunction with the release of Marvel’s “Spider-Man: Far From Home’’ movie. The partnership produced a crossover commercial featuring Donovan and Spider-Man star Tom Holland. Don’s signature shoe came in four different color styles, which centered around Spider-Man themes.

5. Donovan’s purpose is much bigger than basketball. — He is known for his charitable and philanthropic efforts, anti-bullying advocation and his kind attitude.