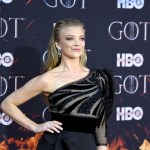 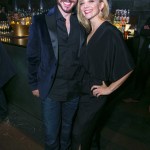 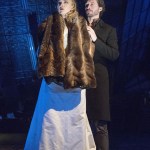 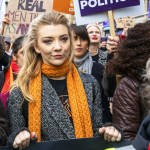 Surprise — ‘Game of Thrones’ star Natalie Dormer is a mom! She and partner David Oakes welcomed a daughter months ago, so here’s what you need to know about David.

“It’s the perfect thing to do during a pandemic — get pregnant, have a baby,” Natalie Dormer, 39, joked during Tuesday’s (Apr. 27) episode of the That’s After Life! Podcast. The actress who portrayed Margaery Tyrell on Game of Thrones told the podcast’s hosts, Esther Rantzen and Adrian Mills, that she and partner David Oakes welcomed a girl in January. “I feel like I’m probably being a bit of a cliché, she’ll probably be sitting in a bar in 30 years’ time one day going, ‘Yeah, I’m a COVID baby.'”

“She’s just three months, and she’s an absolute joy,” added Natalie, per Entertainment Tonight. “I’m never going to complain about shooting hours ever again because sleep deprivation is something else. … People say, ‘Your whole perspective on life will change, and your whole set of value system’ and you sort of roll your eyes and go ‘Yeah, yeah’ — and then you have one, and you go, ‘Oh. Wow!'” This marks the first child for Natalie and David – so who is the man who’s now a proud father to an “absolute joy” of a girl?

1. What Does David Oakes Do?

Rowan David Oakes was born on Oct. 14, 1983, in Hampshire, England, per his IMDB profile. He got involved in acting at a young age and studied England and Drama at Manchester University. He was also on the board of governors for the Conservatoire of Dance and Drama, per IMDB.

“When I was seven, I played Peter Pan in the primary school play, but my confidence took a knock when I went to show our next-door neighbor my costume, and she thought I was a fairy – so it wasn’t then! I was, and perhaps still am, quite shy,” he told Broadway World in 2017. “I guess I started acting when my mother feared I didn’t have any friends, and so she enrolled me in a youth theatre. But in a roundabout answer to your question, it was when I was nine: I found myself in the chorus of the Salisbury Playhouse pantomime. But it wasn’t the acting, or at least not just the acting – it was being a part of something; adults not talking down to you, being part of a collaborative community, making something that hundreds of people relished each evening.”

He began his acting career at Shakespeare’s Globe performing in Love’s Labour’s Lost and in We the People, a play that explored “the foundation of the American Constitution.” However, it wouldn’t be long before he leaped from the stage to the silver and small screen.

2. What Had David Oakes Acted In?

In the late 2000s, David had landed a handful of television roles (Bonekickers, Walter’s War, Henry VIII: The Mind of a Tyrant). In 2010, he was cast in the role of Lord William Hamleigh in The Pillars of the Earth, a fictional drama set in 12th century England. The following year, he appeared alongside Jeremy Irons, Holliday Grainger, and François Arnaud in The Borgias. Since then, he developed a knack for landing roles in historical dramas. He appeared in World Without End, the sequel to Pillars of the Earth, portrayed George, Duke of Clarence on The White Queen, and Ernest II in Victoria, a historical drama about Queen Victoria.

3. David Has Often Played The Villain.

“Villains often have more intricate characters, I find. Or, at least, certainly on screen that seems to be the case,” he said to Broadway World. “Often the hero protagonist focuses on expressing the narrative, leaving more joyful characterization the domain of the villain.”

“What’s quite nice is about Ernest in Victoria,” David told The Arts Desk in 2017, “[is] he doesn’t commit quite so many non-consensual sex acts as some of the previous characters I’ve played.” When asked why he often casts in those roles, he couldn’t come up with an explanation. “When I was at drama school, I was the youngest in my year and was just playing floppy-haired romantic leads. I played Lysander four and a half times before I became a professional actor. Maybe I rebelled against what I had already done and was more inclined to delve into the darkness and the depths.”

“The other actors I’ve worked with over the last decade – Eddie Redmayne or Sam Claflin or Tom Hughes in Victoria, or Doug Booth – have gone down the more traditional romantic juve lead route. And I just never went that way,” he added. “I don’t know why. Maybe I genuinely have a darker soul, and directors are good at picking up on that. I certainly haven’t done anything anywhere near as bad as any of the characters I’ve played have. I have a very firm moral framework. My dad’s a vicar, so we grew up with that. You have that in you whether you want it or not.”

4. When Did David Oakes And Natalie Dormer Meet?

David and Natalie met in 2017 when they both starred in the West End play Venus In Fur, according to Bustle. “When I first met Patrick [Marber, director of Venus In Furs] all those months ago, he said that both me and Natalie were head-actors first and that the challenge would be to get us to sink it into our bodies,” David told Broadway World.  “That was the first time I was made aware of the similarities between myself and Nat. Each day we discover more parallels – it’s proving extremely exhilarating and gloriously productive.” David added that he felt an “innate freedom” with Natalie, one that comes only through “mutual trust and comprehension,” and that freedom allows his creativity to soar. “There’s no sub and no dom – without the other, it simply wouldn’t work.”

5. When Did David And Natalie Start Dating?

When David and Natalie starred in Venus In Furs, she was engaged to director Anthony Byrne. Anthony has directed numerous TV series, including Silent Witness, Mr Selfridge, Ripper Street (fun fact: David appeared on an episode in 2013, a year before Anthony directed his first episode of the series), and Peaky Blinders. Anthony worked with Natalie in the 2018 film, In Darkness. Awkwardly, 2018 is when Natalie and Anthony ended their 11-year relationship, and shortly after, David and Natalie began theirs.

The couple is fairly private with their lives — if the fact that she had a baby in secret didn’t tell you that. They are spotted out in public, from time to time, but mostly, they keep to themselves.