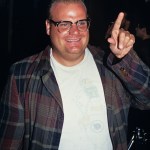 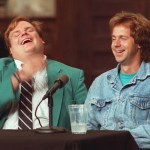 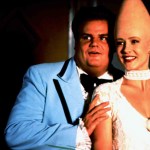 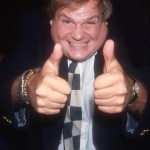 Chris Farley, a comedian beloved for his loud comedy style, was celebrated on ‘Saturday Night Live’ on May 4.

Many are thinking of comedian Chris Farley today, after Adam Sandler, 52, sang a song in remembrance of his former Saturday Night Live cast mate while hosting the sketch show for the first time ever. Learn five things to know about the former SNL star, below.

1. Chris was part of the ‘Bad Boys of SNL’ group in the early ’90s. Chris performed on Saturday Night Live alongside Adam, Chris Rock, 54, Rob Schneider, 55, David Spade, 54, and Norm Macdonald, 59. The group was known for its energetic “fratty” type of comedy. One of Chris’ most popular characters on the show was “Matt Foley,” which was based on a friend of his. Chris and Adam left the show in 1995 after five years on the show.

3. Chris died at age 33 in 1997. The comedian died from an accidental cocaine and morphine overdose, according to a medical examiner, reported the New York Times.

4. The comedian’s career began in improv. He started in Madison, Wisconsin at the Ark Improvisational Theatre, and then went to Chicago, where he performed at the Improv Olympic.

5. He was born on Feb. 15, 1964. Chris grew up in Madison, Wisconsin, and attended Marquette University in Milwaukee. He was one of five – his siblings were Barbara, John, Tom Jr., and Kevin.