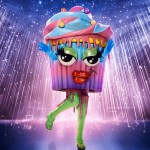 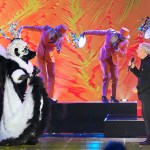 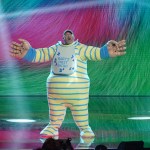 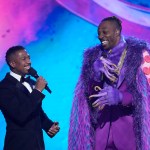 ‘The Masked Singer’ surprised us with another celebrity duo: Banana Split! Ahead of the November 3 episode, these are all the key clues we know about Banana Split.

Banana Split made a dazzling entrance during the third episode of The Masked Singer. The Banana Split consists of not one but two celebrities, making it that much harder for the panelists and fans to guess their identities. Thankfully, the celebrities behind Banana Split have revealed a number of clues to keep in mind.

Who Is Banana Split?

In their first clue package, Banana Split dropped a number of hints. The Split part of the Banana Split revealed she got a “day job” when she first moved to Hollywood. She quit when she got her “big break.”

The Banana added that there’s “no such thing as an overnight success.” Split admitted the key was “finding a collaborator that sticks with me through the sweet and sour.” She and Banana are perfect for each other because they share the “same wacky dreams.” During their carnival-themed clue package, Banana Split won a stuffed animal. Could this be a hint that the stars behind Banana Split have a baby together?

Banana Split’s first performance was a gorgeous rendition of “A Million Dreams” by Pink. The Split provided stunning vocals, while Banana was playing the piano. After their performance, the celebs were asked if they’ve worked together before. “Well, we don’t work together all the time, but I think when we have worked together in the past we’ve worked really well,” the female half of Banana Split said. The first guesses from the panelists included Katharine McPhee and David Foster, Emma Stone and Ryan Gosling, and Faith Hill and Tim McGraw.

For their second clue package, Banana Split revealed that song choice has been their “challenge” so far. The three ingredients to a perfect love song included fantasy, pain, and reality. Split told Banana that they should switch reality for heart. They performed an incredible rendition of “Cry Me a River” by Michael Bublé.

During the speed dating portion of the show, Banana Split answered a number of questions. Do you kiss on the first date? “Heck yeah,” Split said. Have they ever dated anyone on the panel? “Well, I went to Costco with Ken,” the man replied. Swimming pool or lake? “Lake,” the woman quickly said. Would you rather celebrate with a small gathering or big party? “Big party!” they both said.

As for who they would date on the panel, the woman revealed, “We would date Nicole [Scherzinger] because we have a ball together.” The next round of guesses included Camila Cabello and Shawn Mendes, as well as Sara Bareilles and Josh Groban. The Masked Singer season 6 airs Wednesdays on FOX.