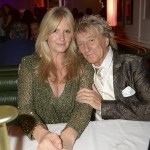 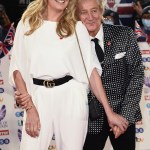 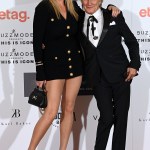 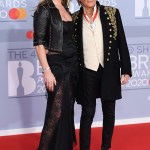 Penny Lancaster has been married to Rod Stewart since 2007, and the pair have two lovely children. Find out everything you need to know about her here!

Rod Stewart, 76, is one of the most successful and loved British Rockstars of the past 50 years. He’s had hits both as a member of the band Faces and as a solo artist. His songs like “Maggie May”, “Forever Young”, and “Do Ya Think I’m Sexy?” are classics that people of all ages know and can sing along to. The singer’s been married to Penny Lancaster, 50, since 2007, and the two seem like they have a great relationship. While Rod has had plenty of well-documented relationships and two marriages in the past, it seems like he really found the one with Penny. Find out everything you need to know about her here!

Penny started modeling at a young age. One of her most notable campaigns was when she was offered £200,000 to be the model for lingerie and swimwear brand Ultimo in 2002, via Evening Standard. Despite the massive payout, the deal did lead to some drama when the company rescinded the offer and instead gave the job to Rod’s ex-wife Rachel Hunter.

After the debacle, a spokesman for Penny’s agent told Evening Standard that she had become more selective of the products she advertises. “We are being very careful about which projects she will pursue. We have moved away from lingerie for good. The new projects in the offing involve much more upmarket clothing,” he said at the time. “Penny would rather promote a product that she believes in and what in her view is a responsible and respectable product. She wouldn’t promote anything just for money.”

Rod Stewart -- Pics Of The British Rock Singer & His Family 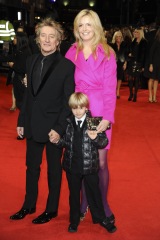 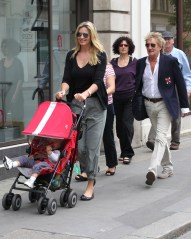 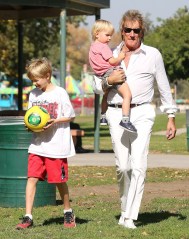 2. She’s a cast member of the show ‘Loose Women’

Other than modeling, Penny has had a very successful career in TV. She’s been a presenter on the talk show Loose Women since 2014, after making a handful of appearances on the show in years prior, with her earliest being 2006. Other than Loose Women, she also competed on Strictly Come Dancing (a British dance competition show, similar to Dancing With the Stars) in the show’s fifth series in 2007.

3. She has two kids with Rod Stewart

Rod is the father of eight children, ranging in age from 10 to 58. Penny is the mother of his two youngest children: Alastair Wallace, 16, and Aiden Patrick, 10. It’s been revealed that Alastair is a great swimmer, with Rod reportedly building a massive swimming pool in his U.K. mansion to help him prepare for the Olympics. Aiden arrived after Penny went through IVF treatment, and her husband reportedly called the youngest son the couple’s “miracle baby.”

During a November 2021 appearance on Loose Women, Rod opened up about what it was like seeing his wife go through menopause, and he offered sound advice to any men who may be unsure of how to react when they see their partners going through the same thing. “We talked about it, which I think is the most important thing a couple can do, and she explained it to me through the tears – because Penny likes a cry, and we talked it through, and I think that’s what couples have to do, and men have just got to get on with it, understand, and come out the other end,” he said at the time.

Before Penny, Rod had had many different relationships, which included him fathering six children with four other women. His first marriage was to model and actress Alana Stewart from 1979 to 1984, and they had two children. Rod admitted that he thinks that they had married too young in a November 2021 interview with People. He mentioned that his father had rightly told him that he wasn’t ready for marriage. “I still had a lot of living, partying, drinking and shagging to do,” he said.

With Alana, he had his daughter Kimberly, 42, in August 1979. Kimberly’s followed in her mom’s footsteps and become a model, as well as an actress and TV personality. She had a short-lived reality series Living With… Kimberly Stewart in 2007, and has had minor roles in shows like Undeclared and Hercule Poirot. She also gave birth to her daughter (and Rod’s granddaughter) Delilah, 10, in August 2011. Alana also had a son Sean, 41, with Rod. Sean was also a star of the reality show Sons of Hollywood.

The singer’s second marriage was to Rachel Hunter from 1990 until 2006. Rod and Rachel also had two kids. Rod mentioned that his second marriage ending really hurt him, but he met Penny shortly after the split. “Rachel broke up with me on a Monday evening, and it was heartbreaking,” he told People. “[Penny] has mended my heart in more ways than one.”

From his marriage to Rachel, Rod had his daughter Renee, 29, in June 1992, and son Liam, 27, in September 1994. Between his first and second marriage, Rod dated model Kelly Emberg, whom he had his daughter Ruby Stewart with. His first daughter Sarah Streeter was born in 1963 to Susannah Boffey and raised by adopted parents.