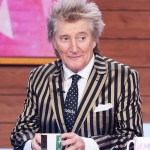 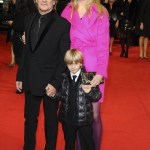 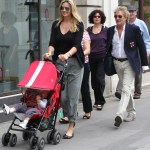 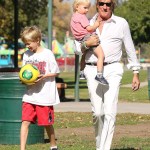 There’s nothing like a football game to put you into the holiday spirit. Rod Stewart joined his sons – Liam and Alastair – but first, they had to get dapper for their boys’ night out.

Usually, when you say, “football game” –or “soccer” for Americans — the first thing that comes to mind isn’t “three-piece suit.” Then again, that’s why Rod Stewart and his family are a cut above the rest. Rod, 76, and his boys – Liam Stewart and Alastair Stewart – got quite fancy for what appeared to be the Celtic Football Club’s match against the Heart of Midlothian F.C. on Thursday (Dec. 2). “First ever Celtic game,” Liam, 27, captioned the Instagram post he published on Dec. 7. In the first slide, Liam stands next to his father and Alastair, 16, each dressed to the nines. Alastair, in particular, looked rather posh but couldn’t outshine his father – who wore a black, fur-trimmed coat and a tie sporting the green-and-white of Celtic F.C.

“Finally, a game fell on a day that I could make it,” added Liam, who plays for the Milton Keynes Lightning professional hockey team. “What a time it was,” he said, along with a video of the sights at Celtic Park in Parkhead, Glasgow, Scotland. Liam also shared a few more photos of the night, including one of him and his brother standing together in front of the statue of John “Jock” Stein, CBE, the first manager of a British team to win the European Cup (which he did, with Celtic, in 1967.)

As for why Rod Stewart – a British musician born in Highgate in North London – would support a Scottish football team, he explained it during a visit on Talk Radio at the start of December, per The Celtic Star. “I am English, I have. Iver pretended to be a Scotsman,” he said. “My Dad was from Leith [an area in the northern area of Edinburgh], and was a Hibs [Hibernian F.C.] fan & that rubbed off on me.” Rod also explained why he didn’t support an English club closer to his hometown. “I met Jock Stein and since that day I was a Celtic fan, I was so enamored,” he said.

It appears that love has been passed down to his sons. Liam and Alastair are two of Rod’s eight kids. His eldest, Sarah Streeter, was born in 1963, while his youngest, Aiden Stewart, was born in 2011. Alastair is his seventh child, one the “Don’t You Think I’m Sexy” singer shares with Penny Lancaster-Stewart, whom Rod has been married to since 2007. Liam’s mother is New Zealand model Rachel Hunter. She and Rod welcomed Liam in 1994.