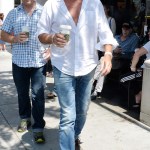 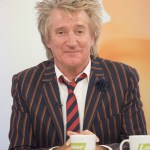 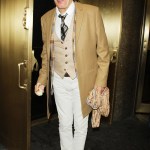 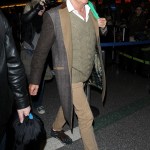 The ‘Maggie May’ singer’s ex-wife posted a sweet family photo of her with the kids, after not seeing each other for over a year.

Reunited, and it feels so good! Rachel Hunter, 51, posted a selfie of herself with her two kids Renee, 29, and Liam, 26, on Instagram on Tuesday August 31. The model wrote that she hadn’t seen her son or daughter, whom she shares with her ex-husband Rod Stewart, 76, in over 18 months. The whole family looked incredibly happy to be able to spend time together and bond!

It looked like the family had just gotten out of the water on a Los Angeles beach. They all had wet hair, and Rachel and Renee both sported black bathing suits. It also looked like Rachel was wearing a gray-green cover-up. Liam was shirtless and wore a cross necklace. Renee also had a thin, chained necklace on. In her caption, it sounded like Rachel hadn’t seen either child in a year and a half due to the COVID-19 pandemic, but she swore to be resilient. “I know so many out there are still missing this moment reconnection with family,” she wrote. “The ups, the downs the moments of surrender, the tests, the exposures, the bubbles, the borders. It’s a matrix. To maneuvering, We all have been through and still are . But we will get through this.” While it’s been a long time since Rachel saw her son and daughter, she has gotten in touch with some of the “Forever Young” singer’s extended family. She posted a photo with some of Rod’s other ex-wives and children on August 24.

Renee and Liam are Rachel’s only children, whom she had with Rod. The pair were married from 1990 and separated in 1999, and their divorce was finalized in 2006. While Rachel has only had the two kids, Rod has had six other children with other partners. His first daughter Sarah Streeter was born in 1963 and was raised by adoptive parents. He had two children with his first wife, model Alana Stewart. Alana gave birth to two kids: Kimberly, 42, and Sean, 41. His model ex-girlfriend Kelly Emberg had a daughter: musician Ruby Stewart, 34. He has two sons from his current marriage to model Penny Lancaster-Stewart. Their boys are Alastair, 15, and Aiden, 10.