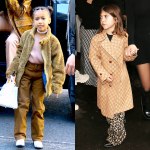 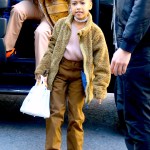 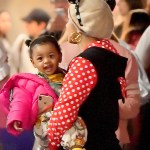 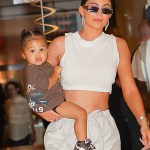 Kim Kardashian’s eldest child North West is one of many celebrity kids who have rocked outfits that cost a fortune!

Ahh to be young and rich… with the emphasis on being rich. A-listers from Cardi B to Malika Haqq to Kylie Jenner and more have spared no expense when it comes to dressing their kids in the most expensive of fashions. Many of these stars have an unapologetic attitude about it even when being confronted by social media commentators over why they are spending so much on their littles ones. Some of these ensembles that their kids rock from well-known designers cost a whopping $5,000 and more! Holy cow. Take a look at some of the most wealthiest outfits worn by these famous babies.

It’s hard to believe that a 5-month-old has worn something that costs more than anything we would spend on a single purchase. But that was the case as evidenced by these sweet photos that Malika posted with her adorable son Ace Flores in August 2020. “King in my palAce #5months,” she captioned next to the pics. It was here that the precious twosome decided to go all matchy matchy in head-to-toe Fendi where his fleece alone was $630. Then you add in her glamorous outfit plus the Fendi stroller he was in and the total cost comes out to a whopping $5,800!

Accessories are a key part to making an outfit pop. Cardi B & her husband Offset definitely got that memo when they gifted their daughter Kulture with a $9,000 Birkin bag for her 2nd birthday! The “Bodak Yellow” rapper later defended her decision to buy the extravagant gift for her daughter after receiving a ton of backlash from fans. “No it’s not always about what your kids want. Kids want ice cream and cake all day NOT HAPPENING, My kid wants to be in the pool all day NOT HAPPENING,” she began. “We can do light up shoes and princess dress all day in the house if we going out she gotta Match me! If I’m fly my kid too.”

Anything that is made one of a kind is sure to cost a ton of money. Kylie Jenner & her daughter Stormi, 2, lit up the holiday season in 2019 when they stunned in these custom made numbers by Ralph and Russo. “Most wonderful time of the year,” the makeup mogul wrote underneath the pic of them stunning in their gowns. The designers had a major moment happen for themselves when they put together Meghan Markle‘s engagement dress a couple years ago. That outfit alone cost $75,000 so it would come as no shock if Kylie & Stormi’s had a very high price tag as well!

Kim & Kanye’s daughter North has been styling and profiling ever since she was a little baby. She’s had so many memorable fashion moments in her short seven years of life, many of which have included outfits and accessories that are crazy expensive! North sported a Fendi bag while heading to church in April 2017 that cost $3,450! But wait… there’s so much more. There was also this warm fur coat that she wore at New York Fashion Week two years earlier that had about the same price tag!

The dress Beyonce & Jay-Z‘s daughter Blue Ivy Carter wore in “Black is King” earlier this summer sure looked radiant on her. The one she aced at the VMA’s in 2016, however, had a price point on it that would shock anyone! Blue, who was 4 at the time, arrived at one of the biggest events of the year in a Mischka Aoki beige, floor-length gown. This certainly wasn’t off the rack whatsoever, as it cost nearly $11K! Be sure to click on our gallery above to see more celebrity kids in their pricey attire.

Khloe Kardashian dressed up her two-year-old daughter, True Thompson, in the most luxurious outfit for a shopping trip in Los Angeles. The mother-daughter duo headed to Nordstrom on February 15, with True rocking some serious designer duds. The toddler carried a mini Louis Vuitton crossbody bag that retails for $1500. Add to that her adorable leopard Fendi combat boots, and the price of her ‘fit only climbs!