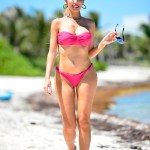 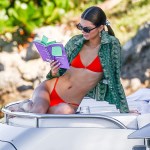 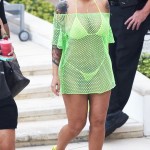 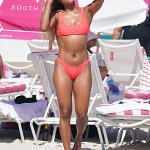 Neon swimsuits have been setting the Internet on fire over the past year, with Heidi Montag and more stars rocking the look. Take a look at the eye-catching pics here!

With many quarantine regulations still in effect, there’s not much to do BUT lounge around in a bikini whenever the weather is warm. There are tons of different swimsuit styles and looks, and neon is one of the trends that’s been in style for quite a few years now. Stars like Heidi Montag, Sofia Richie, Kylie Jenner, Gigi Hadid and many more have all rocked neon bikinis and we rounded up some of the hottest looks for bright-colored inspiration.

Heidi rocked a neon green bikini in Jan. 2021. Although the season was still winter, a sunny day in California had her happily out enjoying the waves at the beach. She also wore sunglasses with the look and had her blonde locks up in a high ponytail. She was joined by husband Spencer Pratt and their son Gunner, who were also rocking hot weather-friendly clothes, and the cute little family totally gave off summer vibes!

Sofia always looks amazing in her bikinis, and she rocked a neon look while hanging out with ex-boyfriend, Scott Disick, on a yacht in Miami. Sofia and Scott were together at the time, and they cuddled close as she showed off her tanned figure in the bright pink ensemble. Sofia’s two-piece featured a sporty top and full bottoms, and She stood out amongst her pals on the massive boat in the look.

Meanwhile, Kylie is quite often showing off bikini looks on social media. In May 2020, she took several pictures in her massive backyard while wearing a lime green bikini. In one shot, she sat at the edge of the pool with her feet dipped into the shallow end. The bright color of the green swimsuit made Kylie’s tanned skin stand out in the photos, and she looked like a full-on model as she showed off the bikini look.

Larsa Pippen is one of our ultimate bikini queens of summer 2020. She’s rocked just about every swimsuit style you can imagine, including this neon orange bikini. Larsa rocked the look while posing on a balcony on July 30. She was surrounded by greenery, blue skies and the ocean in the background. Of course, she wore her sunglasses in the pic, as well, for a complete summertime look.

Back in March, Kendall Jenner posted a photo of herself wearing a lime green bikini while on-board a massive boat. She was joined by her pal, Sofia Villarroel, who wore a bright orange bikini, so they had a total neon theme going on for their Instagram pic. Kendall also wore a bandana on her head and sunglasses over her eyes and she looked like the ultimate summer queen!

Hailey Baldwin looked similar to Sofia in her sporty swimsuit, which was bright orange. She wore the look in June 2020 and showed it off while sunbathing on a comfortable lounge chair. Hailey also kept the sun out of her eyes with some sunglasses and a straw hat, which was the perfect combination. Scroll through the gallery above to check out even more stars, like Amber Rose, Farrah Abraham, Doutzen Kroes and more, in their neon bikini looks!