Josey Hollis Dorsey’s claim to fame is a heartbreaking one, as he first gained a lot of notoriety after his mom, Naya Rivera, died saving him.

Josey Hollis Dorsey is best known as Glee star Naya Rivera and actor Ryan Dorsey‘s only child together. He turns six years old in September 2021, and he has certainly grown a lot since Naya’s tragic passing in July 2020. Even though he hasn’t lived a lot of life yet, he’s experienced a lot of sorrow at such a young age. Especially given the fact that he was the last person to ever see his mother alive. Find out more about him here.

Who Is Josey Hollis Dorsey?

Josey Hollis Dorsey was born on September 17, 2015. His parents, Naya Rivera and Ryan Dorsey, had a whirlwind romance. Naya and her ex-husband, Ryan Dorsey, actually surprised fans in 2014 when they tied the knot just three months after she broke off her engagement to Big Sean. And while they welcomed Josey into the world a year after getting married, their relationship had its fair share of ups and downs and they eventually split.

Josey Hollis Dorsey currently lives with his father, Ryan, following the tragic and accidental drowning of his mother, Naya, in July 2020. 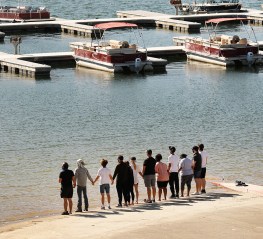 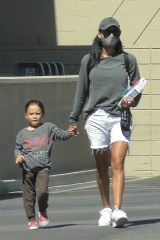 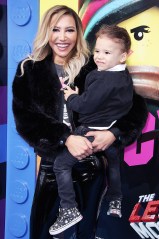 The Glee actress rented a pontoon boat for her and her son at Lake Piru — an hour north of Los Angeles — on July 8, 2020. But hours later, he was discovered in the boat alone and Naya was nowhere to be found. It took nearly a week for Naya’s body to be discovered on Monday, July 13. The Ventura County Sheriff’s Office said that Josey told them he and his mother had gone into the lake to swim, but the unanchored boat started drifting away and she only had enough strength to get him back on board. She wasn’t wearing a life jacket, and Josey reportedly told the authorities that when he looked back into the water, he saw Naya disappear under the surface.

“She mustered enough energy to get her son back onto the boat, but not enough to save herself,” Ventura County Sheriff Bill Ayub said during a press conference on July 13, 2020. Naya used the last bit of her strength to save her son, who was four years old at the time. Rivera tragically drowned, and we can only imagine it’s been a difficult time for him ever since.

What Is Josey Hollis Dorsey’s Relationship With His Parents?

Following Naya’s death, Josey went to live with his dad, Ryan. And as it was later reported, after Naya’s passing, the Glee actress’ sister, Nickayla Rivera, moved in with Ryan, too. They decided to raise Josey together, but of course, romance speculation ran wild.

However, following the reveal of their new living situation, Ryan took to Instagram to squash any romance talk. Ryan titled his 12-minute Sept. 29 Instagram video with the following: “Its not always black and white.” And in the clip, he said, “I can’t believe this is real life and I am about to address any of this nonsense. It’s been brought to my attention that there’s a lot of people who have a lot to say and opinions on a family’s tragic situation. There’s people making judgements, making assumptions, they’re sending terrible messages wishing death upon strangers who they truly know next to zero about.”

He later went on to say that Josey is the one who asked for Nickayla (his nickname for her is “Titi”) to live with them. “And then he asks me if Titi can live with us. ‘I want Titi to live with us forever,’ because she’s now the closest thing that he has to a mom, because you’re gonna need all the help you can get as a single parent, trying to build your career and navigate this disaster with your child and you deal with it every hour of every day for 80-plus days now,” Ryan explained.

“I wouldn’t want any of you to ever have to go through any of that and to have to let him get what he wants, what he asks for and what he needs right now, which is his family. Even if you know it’s temporary and it’s not forever. It’s a temporary situation and, after all that he’s had to go through, how could you deny him that, because of what? Because of what some strangers might think or say or spew some hatred based on some ill-advised, illogical, misinformed tabloid? It’s sad. It really is,” he continued.

What Is Josey Hollis Dorsey Doing?

Fortunately, time has healed Josey and Ryan’s wounds just a little bit, but they’ll always miss Naya. And in the time since her passing, they’ve shared some special moments with each other.

Not only did Ryan show off Josey’s cool new haircut in a photo posted on Instagram in October 2020, but Ryan also shared cute videos of little Josey dancing to Michael Jackson‘s greatest hits just before Halloween that very same year. Clearly, Josey seems to have inherited some of his mother’s amazing talents.

Some of Naya’s most memorable moments in Hollywood were those of her singing and dancing throughout all six seasons of Glee. So who knows — maybe Josey will grow up and become a dancer just like her.

Then, when Christmas 2020 rolled around, Ryan shared a photo of him and his son, Josey, decorating their Christmas tree together. At the time, it was five months after Naya’s passing, so we can’t imagine the holiday was very joyous for them. However, Ryan continued to do whatever he could to put a smile on Josey’s face.

The adorable photo showed Ryan holding Josey in his arms, while they wore matching red Santa hats. Then, in January 2021, Ryan gave an update on Josey and how he’s been handling the loss of Naya.

“Shout to @panthers and @sirpurr for sending us some sweet holiday swag. We really appreciate it. This little boy…man…I couldn’t be any prouder of someone. At such a young age, he’s endured more than anyone should at 5 years old,” Ryan said in the caption for a photo showing Josey wearing some pretty cool NFL gear.

“Without even fully realizing it, he lives the #keeppounding mantra every day with his resilience,” the Yellowstone star added, before he started talking directly to Josey. “You’re so strong, so brave, and so kind. I will always be proud of you and we will always #keeppounding b/c that’s all we can do.”

Ryan then concluded his caption with the following message: “To everyone that had a tough 2020…you will never forget it, we think about it every day and I feel for you and vibrate alongside you on that frequency…I hope you can find some way to go on with your days, to persevere – no matter how hard it is. All the love. #keeppounding.”

Most recently, in June 2021, Ryan revealed that Josey graduated from Pre-K. They even posed for a photo together at Josey’s graduation, and Ryan captioned the pic with the following message: “Fresh outta Pre-K boy! Next Up Kindergarten! #summertime #proudDad”. See the adorable photo below.

Following Naya’s death, Ryan filed a wrongful death lawsuit against Ventura County, on behalf of their son. At this time, there’s been no resolution.