Who is Dylan Meyer? Everything to know about the screenwriter that Kristen Stewart has been dating since 2019.

Kristen Stewart burst into the pop culture zeitgeist when she took on the role of Bella Swan in Twilight and its subsequent sequels, but perhaps the biggest source of intrigue was her relationship with co-star Robert Pattinson. While the two went their separate ways in 2013 after four years together, KStew’s relationships still remained under the spotlight.

The actress, 31, has gone on to date several other high-profile people following her split, including St. Vincent and Stella Maxwell. Now, she is dating fellow actress and writer Dylan Meyer. The duo have been dating since August 2019 — and it appears to be quite serious, as the star of the upcoming Princess Diana biopic Spencer told Howard Stern in November 2019 that she “can’t fucking wait” to propose to Dylan.

“I want to be, like, somewhat reasonable about it, but I think good things happen fast,” Kristen told Howard, adding that she already had a plan on how to propose. When asked about the plans, the actress said, “I can’t say right now, because she’ll find out.” She added that her marriage plans weren’t “tied to any weird sort of convention; it’s just, like, when you know, you know.”

Below is everything to know about Dylan, the woman that Kristen “can’t fucking wait” to propose to! 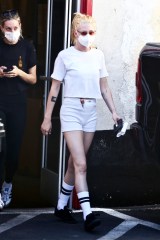 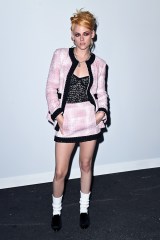 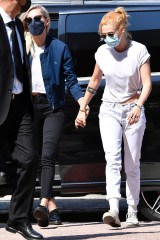 What does Dylan Meyer do?

Dylan is a screenwriter and actress. She has written for Amy Poehler’s Moxie and Seth Rogen’s An American Pickle, and has also worked on XOXO and Rock Bottom. Dylan has also starred in a few shorts and TV series, including Wrestling Isn’t Wrestling, The Death and Return of Superman, and Homemade.

How did Dylan Meyer and Kristen Stewart meet?

While the duo began dating in 2019, Dylan and Kristen actually met six years prior on a movie set. Kristen revealed as much during her chat with Howard back in 2019. “The day that I met her, all bets were off,” she told Howard. “I was like, ‘Where have I been and how have I not known you?’ She’s been, like, living in L.A. alongside my life somehow, but not ever converging?” Kristen told the radio host that she and Dylan reconnected several years later at a mutual friend’s birthday party — and that she knew right away that she was in love. “It was really late, and we were in some shitty bar, and her friends were there or whatever, and they walked out, and I was just like, ‘Oh man, I’m so fucking in love with you,” Kristen said. “It was so obvious. It just is.”

What else is there to know about Dylan Meyer?

A quick glance at Dylan’s Instagram account indicates that she is a cat parent. The screenwriter frequently shares snapshots of her two cats. Ahead of her cats’ third birthdays last October, Dylan wrote, “These two little dingbats are turning 3 this week and while I certainly would not say they have made my life easier, they surely have brought me an immeasurable amount of joy with a side of hijinks. Happy birthday you sophisticated young ladies, thank you for being my friends!” She also regularly posts about issues that are important to her, including getting out to vote and advocating for the Black Lives Matter movement.

While her girlfriend is not on social media, Dylan would occasionally post photos of Kristen. Last September, she turned the Instagram mic over to Kristen on National Voter Registration Day. The actress encouraged her girlfriend’s followers to vote and wrote, in part, “For anyone that might need to let out a little aggression today… it is national register to VOTE day. I never do this but for anyone who has not registered to vote please take this opportunity to feel HEARD. And not hopeless. I am voting because I WANT to believe in our country.”

Prior to her relationship with Dylan, Kristen had some notable partners beyond Robert. Following her highly-publicized breakup with her former Twilight co-star, Kristen dated producer Alicia Cargile for about two years prior to splitting in 2016. Following that breakup, Kristen dated musician St. Vincent, real name Annie Clark, for a bit that year following the singer’s own split from longtime girlfriend Cara Delevingne. The following year, Kristen began dating Stella, but the two called it quits in late 2018 after nearly a year together. Finally, Kristen reportedly began dating Dylan in the summer of 2019. Dylan confirmed the romance on Instagram in October of that year with a snapshot of the two kissing.