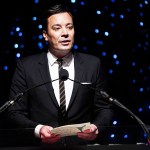 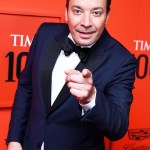 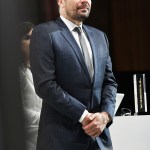 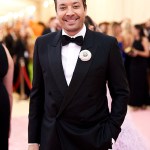 Jimmy Fallon has been in a rock-solid marriage to Nancy Juvonen for over 13 years. Here’s everything you need to know about the late-night host’s wife.

Jimmy Fallon, 46, is often cracking jokes on his late-night talk show, but one thing that’s definitely no joke for Jimmy is his marriage to Nancy Juvonen, 54. The Tonight Show host and Nancy, a film producer, got married in 2007, and they will celebrate their 14th wedding anniversary this coming December. The couple has since expanded their family by welcoming two children: daughters Winnie Rose, 8, and Frances Cole, 6.

Over the years, Jimmy and Nancy have enjoyed a blissful marriage filled with lots of love, and lots of laughs. “You really want to pick someone who you don’t have to like every single thing the same, but you kind of have to have the same values in a way,” Jimmy said on The Tonight Show in June 2020. “What makes you both laugh is fun because then you laugh together at the same stuff.” Below, learn everything you need to know about Nancy and her marriage to Jimmy.

How Did Jimmy And Nancy Meet?

Nancy was born in Connecticut on May 18, 1967 and raised in Mill Valley, California. She graduated from the University of Southern California with a degree in sociology in cooperative education. In the early 2000s, Nancy met Jimmy on the set of Saturday Night Live when she was accompanying close pal Drew Barrymore, who was hosting that week’s episode. “I kind of crept in quietly, and all of a sudden Jimmy goes, ‘Hey, Nancy! You’re Nancy? Hi, it’s so nice to meet you, welcome!’ ” Nancy recalled of meeting her husband on The Tonight Show last year.  “And I felt just so embraced and cool, like, ‘Thank you! Thank you for welcoming me in.”

But Jimmy and Nancy’s romance did not heat up until the two worked together on the 2005 rom-com Fever Pitch. The movie starred Jimmy and Drew, and was produced by Flower Films, the production company that Nancy started with Drew. “He was just so friendly and fun and welcoming and he loved music,” Nancy said of Jimmy. The pair kept in touch afterwards and eventually reconnected in London while promoting the film. From there, the romance was officially a-go.

When Did Jimmy And Nancy Get Married?

After roughly two years of dating, Jimmy proposed to Nancy at her family home in New Hampshire in August 2007. On December 22, they got married on Necker Island in the Caribbean. The island is owned by billionaire Richard Branson, who just so happened to be a big fan of Jimmy. The wedding guest list included around “12 people,” the couple said on a “Ask the Fallons” Tonight Show segment, and they had a “rager time.”

“It was so much fun,” Jimmy said of his wedding day. Nancy explained that two days after the wedding, all the guests left with the exception of Drew, who remained on the tropical island with the couple and staff to keep the celebrations going. “Hands down, one of the best days and nights of my life,” Jimmy gushed.

Jimmy And Nancy Have Two Children

Jimmy and Nancy expanded their family from two to three when they welcomed their first child, daughter Winnie Rose in 2013. The following year, they welcomed daughter Frances Cole. Both kids were born via surrogate, due to Nancy struggling with fertility. “We’ve tried a bunch of things. Anyone who’s tried will know, it’s just awful,” Jimmy said on Today after Winnie was born.

Since welcoming their two bundles of joy, Jimmy and Nancy have been so happy to have their family of four complete. Both Winnie and Frances have made occasional appearances on their dad’s late-night talk show, leading to many adorable and hilarious family moments. In May 2020, Jimmy told PEOPLE that he even “bribes” his kids to stop them from interrupting his interviews. “There’s no sense in me going, ‘Hey, listen to Daddy. We’re doing a monologue here.’ They’d just be like, ‘What? What are you talking about?’ ” Jimmy said.

Nancy Is A Film Producer

While Jimmy is obviously successful with his Emmy Award-winning talk show, his wife is no slouch in the entertainment industry either. Nancy is a co-founder of the production company Flower Films, which she started with Drew. The two met in 1993 through Nancy’s brother Jim, a writer and producer who was working on the 1995 film Mad Love, which Drew starred in.

Flower Films is based in L.A. and has produced a number of hit films. Among them are Never Been Kissed, Charlie’s Angels, 50 First Dates, He’s Just Not That Into You, How to Be Single, and The Stand In. Flower Films also produced Drew’s Netflix series Santa Clarita Diet and produces her ongoing daytime talk show, The Drew Barrymore Show.

Jimmy and Nancy truly have an inspirational and beautiful marriage. The happy couple never shies away from showing off their love for one another, whether that be during family outings with their kids or in interviews. Amidst the COVID-19 pandemic, Jimmy credited Nancy with helping watch their daughters while helping produce The Tonight Show at home. “My wife is the brains behind this whole thing,” he told PEOPLE. “She’s the production scout, the producer, the lighting person, the editor, the director. I could not do any of this without my wife. She is everything.”