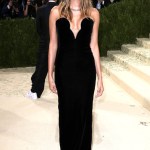 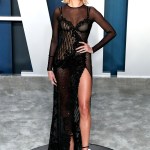 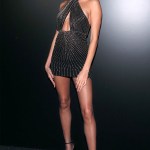 Hailey Baldwin is one of two daughters born to Stephen and Kennya Baldwin. Find out about the model’s parents and take a look back at some of the most memorable things she’s said about them over the years.

Hailey Baldwin, 24, comes from the legendary Baldwin family known for its many actors, including her dad Stephen Baldwin, 55. Stephen and his wife Kennya Baldwin, 53, whom he married in 1990, welcomed the model in 1996, three years after welcoming her older sister Alaia Baldwin, and have been an important part of her life ever since. Although she tends to keep her personal life with her parents private most of the time, Hailey has occasionally opened up about them and their impact throughout her time in being in the spotlight, and we’re looking back on those moments here.

From getting introduced to her future husband Justin Bieber by her dad when she was a kid, to admitting she feels “lucky” that her folks are still married, there’s a lot of interesting tidbits Hailey’s confirmed about Stephen and Kennya and how they’ve changed her life for the better. Find out more below!

Stephen Introduced Hailey To Justin Backstage At The ‘Today’ Show In 2009.

The future husband and wife could be seen awkwardly greeting each other and quickly shaking hands in a now viral video after Stephen introduces his “daughter Hailey” to the pop star and tells him they’ve been “enjoying” his “music. Although Hailey later admitted she didn’t know much about Justin at the time of their first exchange, he later joined her and her parents for a family dinner and bowling outing after her dad “connected” with him and his mom as friends. 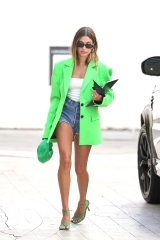 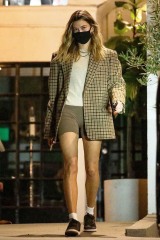 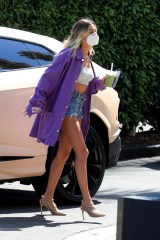 “To be honest, this is the truth. He was so new that I didn’t really know a lot about him yet,” she said during an appearance on The Tonight Show Starring Jimmy Fallon. “It was really kinda before anything. I met him and his mom and my dad kind of just connected as friends and we invited them over to our house the next day. So him and his mom just came over for family dinner with me and my family and we went bowling.”

Hailey Admitted She Turned To Her Parents First After Justin Proposed In 2018.

Hailey talked about how she asked for Stephen and Kennya’s advice after the “Baby” singer surprised her with a proposal shortly after they began dating. “In my heart I knew that’s what I wanted to do,” she said about saying “yes” to marrying Justin on his YouTube docuseries Justin Bieber: Seasons, but wanted to see if her parents would “stop” her “from doing something crazy.”

After seeking them out, Hailey thought they would tell her to “relax and take a breath and think about this and see how you feel in like 24 hours or a week” but instead, they were fully supportive. She explained that they said, “Honestly, we think that this is meant to be for you and we know that this is what you want, so we trust you.” The rest is history.

Hailey Once Said Politics Caused A Negative Situation With Her Dad.

In an interview with The Times, Hailey opened up about her and Stephen’s clashing opinions when it came to the presidential election in 2020. Since she’s reportedly a Democrat and and he was a Donald Trump supporter, it affected her in a not so great way. “That was a very hurtful situation for me,” she told the outlet. “I love my father, he’s an amazing dad, but we so strongly disagreed on [the election]. He and my sister strongly disagreed on it. My sister’s husband, like everyone on our side, just doesn’t agree with him. We don’t talk about it now. It’s not worth the argument.”

“It was a very big issue for me, but my dad’s still my dad,” she continued. “I would never let politics get in the way of family.”

Kennya Talked Hailey Back From A Breaking Point In Her Marriage.

“I remember I called her a few different times, one particular time when we were in Brooklyn and I was calling her, I was crying, and I was like, ‘I just can’t do it. There’s no way that I’m going to be able to do this if it’s going to be like this forever,'” Hailey said on the In Good Faith with Chelsea & Judah Smith podcast about calling Kennya during a tough moment in her marriage to Justin.

“And I just remember she was so calm on the phone and she was like, ‘It’s going to pass, and you’re going to be fine and he’s going to be healthy and we’re here for you,'” she continued. “And I do feel like we just had a lot of support. I feel like if I didn’t have support, it would’ve been 10 times harder, and it was already the hardest thing in my life at the time.”

“My mother is Brazilian and I grew up in a house where she and my grandmother only used organic products, from hair dyes to cleaning products,” the blonde beauty said about Kennya, who is the daughter of legendary Brazilian composer Eumir Deodato, in an interview with Vogue. “I’ve been surrounded by natural and clean beauty my whole life.”

Hailey’s Expressed Her Gratitude For Her Parents On Social Media.

Once in a while, Hailey will dote on Stephen and Kennya in posts that honor holidays like Father’s or Mother’s Day and/or their birthdays. “Happy Birthday Daddio. You are my most favorite person forever and ever. I love you 💕,” she wrote alongside photos of some tender moments with her dad in May 2018.