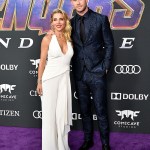 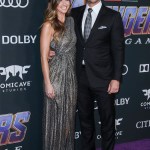 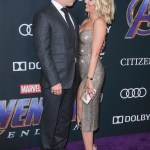 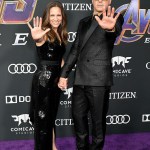 Marvel stars were feeling the love at the LA ‘Avengers: Endgame’ premiere when they shared sweet PDA with their partners and spouses on the purple carpet.

Every superhero needs a sidekick, right? The Avengers: Endgame stars rolled up to the Los Angeles premiere on April 22 with serious arm candy: their boos!  The night celebrating the fourth and final Avengers installment was all about supporting each other, and the love could definitely be felt between the Marvel couples on the purple carpet at the LA Convention Center. Seriously; even Thanos had someone to love at the premiere! Okay, so it was Josh Brolin and his wife, Kathryn Boyd. Still counts! Scarlett Johansson, aka Black Widow, aka Natasha Romanoff, brought her boyfriend, Saturday Night Live star Colin Jost along for the ride. Everyone looked so happy.

An exciting development at the Endgame premiere: Chris Pratt and his fiancée, Katherine Schwarzenegger, made their red carpet debut as a couple! It’s about damn time; Chris and Katherine have been together well over a year, and got engaged four months ago. Chris went full prom mode and matched his tie and pocket square to Katherine’s gunmetal grey dress. She looked beautiful in the grecian-style gown, which was one-shouldered.

Neither Liam Hemsworth nor his wife, Miley Cyrus, are in Avengers: Endgame, but they’ve got an important hookup. Liam’s brother, of course, is the God of Thunder himself, Chris Hemsworth. Miley looked radiant on the purple carpet, debuting new, piece-y bangs and blonde waves, while rocking a curve-hugging black dress with a chest cut-out. Liam was his dapper self in a black suit with no tie. The newlyweds didn’t hold back with the PDA on the carpet; Miley even licked Liam’s chest at one point. She also grabbed her boobs, too, but that’s par for the course.

To see more pics of hot couples on the Avengers: Endgame premiere carpet, like Chris Hemsworth and Elsa Pataky, scroll through our gallery above!