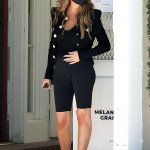 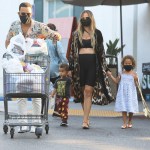 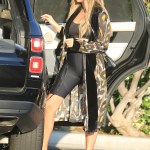 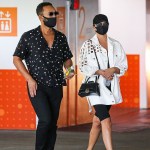 Chrissy Teigen has fashioned some of best looks during her pregnancies. Now that she and husband John Legend are expecting baby number three, we’re taking a look back at her best maternity looks of all time!

Chrissy Teigen has style like no other! The gorgeous model and Cravings author, 34, has walked some of the most high-profile red carpets in the world. But some of her very best looks actually came during her pregnancies. Whether she was seen out and about or at an industry event with her doting husband, John Legend, 41, on her arm, we’ve loved seeing her effervescent maternity style over the years! Now, we’re taking a look at her best looks of all time!

To kick us off, let’s breakdown some of Chrissy’s very best red carpet fashion. Instead of completely covering up her body throughout her pregnancies, Chrissy wholly embraced how she transformed. The stunner wore this gorgeous, custom-made Jonathan Simkhai gown to the Clive Davis pre-Grammys party in January 2018 that not only accentuated her body perfectly, but also put her growing baby bump on full display!

At the time, Chrissy was expecting her second child with John — their son Miles, who is now two years old. From the looks of the photo, Chrissy was nearing her due date and looked absolutely flawless. Of course, Chrissy wasn’t always working designer threads throughout her pregnancies. In fact, when she’s out and about, the star prefers to keep it simple and comfortable.

After Chrissy and John’s joint August 13 announcement that they were expecting baby no. 3, Chrissy stepped out to show the world her growing belly! While on a shopping trip with son Miles, four-year-old daughter Luna, and her own mother, Vilailuck Teigen, Chrissy fashioned this all-black ensemble complete with strappy high heels. The gorgeous soon-to-be mother-of-three looked incredibly confident, almost as if she has been through this before!

It’s truly undeniable how stylish Chrissy is. But during her pregnancies, this woman has seriously served us some amazing looks. Check out more of Chrissy’s maternity style by scrolling through the gallery above!