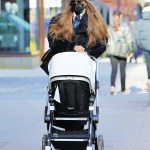 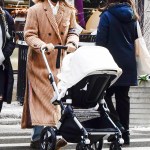 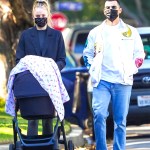 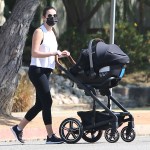 Gigi Hadid, Sophie Turner, and more famous moms are often seen taking walks with their precious bundles of joy in strollers. We’re taking a look at some of these cute outings — and the moms’ cute outfits for the strolls!

It’s common knowledge that one of the best ways to get in exercise while also spending time with your baby is going for walks with a stroller, and many celeb moms do it! Gigi Hadid, Sophie Turner, and more doting mamas have been photographed going for relaxing strolls with their tots in various locations and it’s always an adorable sight to see! From outings in winter while bundled up to keep warm, to summer outings while taking in the sunlight, there’s never a bad time to go for a walk with a baby!

Gigi has been out and about with her Zayn Malik‘s baby girl since giving birth in the fall of 2020, and looking super chic while doing it. The runway queen is not one to opt for casual sweats for these walks, either, which she proved yet again after stepping out in rolled-up space-themed pants while stepping out in New York City in the second week of 2021. Gigi let the attention drift to her fun pants by keeping the rest of her outfit neutral by wearing a puffer jacket, face mask and beanie all in a matching black color.

The Maybelline model showed off her high-fashion tastes by rocking an $1,100 Louis Vuitton shearling hat as she pushed her baby stroller in New York City on Sunday, Jan. 10. The first-time mom paired the hat with a camel jacket made out of a corduroy material, along with a similar pair of low-heeled boots. The mother-daughter duo were in the trendy Soho district as they passed by Aritzia’s Super World pop-up store.

New mom Gigi made headlines when she was spotted taking her baby daughter out for a stroll in New York City for the first time. The model was wearing a black newsboy-style hat, a long black coat and black boots during the outing as she pushed her newborn, whom she shares with Zayn Malik, in a black and white stroller. She also wore tan gloves, a black face mask and round-shaped sunglasses and looked as comfortable as could be in her new role as a mother.

Sophie, who welcomed her baby girl Willa with Joe Jonas in July 2020, has also appeared to be adapting to motherhood well. She’s been seen taking her daughter for strolls around Los Angeles on numerous occasions since her birth, including one on Nov. 13, 2020. The new parent donned a black pinstripe blazer over a dark gray top and black pants during the outing and her hubby Joe joined her in a white jacket with colorful designs over a white top and jeans.

Lea Michele is another new mom that loves going for walks and the arrival of her son Ever, whom she shares with husband Zandy Reich, hasn’t stopped her. The former Glee star was seen pushing an all-black stroller with her baby boy in it during a walk in the L.A. area in Oct. 2020 and looked incredible. She showed off her figure in a white tank top and black leggings and also wore a black face mask.

Gigi, Sophie, and Lea are just some of our favorite celebrity moms who love to take their babies out for strolls in strollers. Take a look at the gallery above to see our full list!