Love is certainly in the air in 2019! From Jennifer Lopez saying “yes” to Alex Rodriguez to Tim Tebow asking Miss Universe Demi Leigh Nel-Peters to make him the happiest man in the world, so many celebrity couples have taken their romance to the next level by getting engaged this year. The list includes Katy Perry and Orlando Bloom; Chris Pratt and Katherine Schwarzenegger; Jennifer Lawrence and Cooke Maroney and many more. Who will wind up with a ring around their finger by the end of the year? You never know.

Fifth time’s the charm for “Jenny From The Block.” This Bronx love story (though A-Rod’s technically from Washington Heights and grew up in Miami) took a wonderful turn on March 9 when J.Lo shared a picture of a MASSIVE rock to her Instagram. Shortly afterward, her rep confirmed that these two are engaged! This will be A-Rod’s second marriage, whereas J.Lo has been married three times – to Marc Anthony, Chris Judd, and Ojani Noa – and engaged two more times – to Ben Affleck and now, A-Rod.

Katy and Orlando got engaged on the most romantic day ever: Valentine’s Day! The actor popped the question on Feb. 14 with one of the most unique engagement rings — a flower-shaped ring with a red diamond in its center. The couple announced the good news with matching posts on Instagram, which featured a close-up selfie of them. Perry’s ring is on full display in their IG posts. Perry and Bloom revealed their engagement just after they were on holiday in Aspen and then in Hawaii. 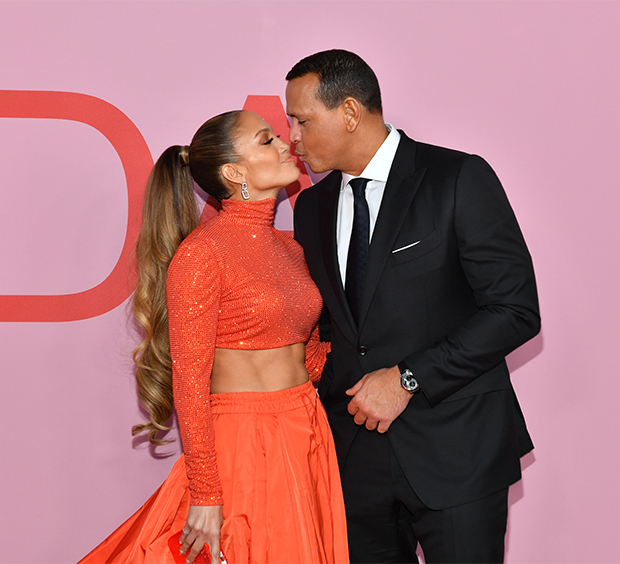 Another engagement that caught fans by surprise was Chris Pratt and Katherine Schwarzenegger’s. The couple, who first sparked romance rumors June 2018, announced their engagement in January after just a few months of dating. The actor, who was first to reveal the special news, posted a photo of him kissing the side of Schwarzenegger’s face on Instagram. In the snap, the author’s massive, oval-shaped engagement ring was on full display as she held him close.

“Sweet Katherine, so happy you said yes! I’m thrilled to be marrying you. Proud to live boldly in faith with you. Here we go!”, Pratt captioned the photo reveal. This marks the second engagement for the Guardians of the Galaxy actor, who was previously married to actress, Anna Faris. Faris sent the couple well wishes following their announcement, and even offered to officiate the forthcoming ceremony! You’ve got to love amicable exes. See these couples and more Hollywood pairs who got engaged in 2019 by clicking through our attached gallery!