Seeing a celebrity couple out on a date is cute and all, but, when stars call their friends and double date — it’s epic. There’s nothing better than celebs getting together and hitting the hottest spots on the east or west coast. Whether it’s Catch, Craig’s, Tao, or Delilah, celeb couples like Dwyane Wade and Gabrielle Union, and Chrissy Teigen and John Legend know how to get down and let loose. And, that’s exactly what went down at Wade’s retirement party on April 10 [2019]. — Take a look through our attached gallery to see your favorite star couples on double dates!

The Wade’s partied at Catch in New York City on the night of his last NBA game, where the Miami Heat to the L to the Brooklyn Nets. Despite losing his last game, D-Wade had a triple double and a heartfelt ending to his legendary career. LeBron James, Chris Paul and Carmelo Anthony were all present for the occasion, and Melo hit the after-party with his wife, La La Anthony. John Legend was also there. And, while it didn’t look like the Timberlake’s were at the game, they certainly showed up at Catch for a champagne-filled night out.

The drinks were flowing and the music was on point for Wade’s 70s-themed bash at the star-studded venue. Dwyane and Gabrielle posed for a photo with Justin Timberlake and Jessica Biel, where all four stars were smiling with their arms around each other. The Wade’s have been friends with the couple for quite some time, and they’ve always supported each other’s careers. 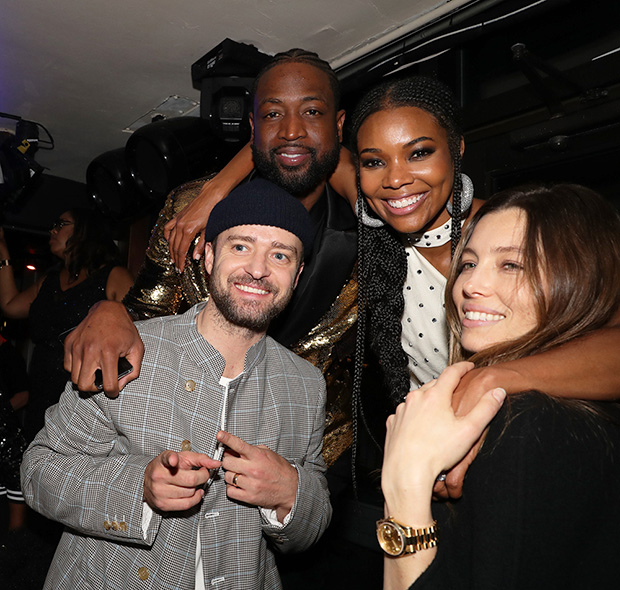 Justin Timberlake and Jessica Biel attend Dwyane Wade’s retirement party in New York City on Wednesday April 10. The celebrity couples partied inside Catch, where Gabrielle was all smiles with her arms around JT and Jessica. (Photo credit: Getty Images)

There’s plenty more double dates to be seen in our attached gallery, from George and Amal Clooney sipping tequila with their good friends, Cindy Crawford and Randy Gerber, along with Kim Kardashian West and husband, Kanye West out with their close friends Chrissy Teigen and John Legend, and many more. Do you have a favorite celeb couple?

Related: National Relaxation Day: J.Lo & More Stars Lounging By The Pool Or At The Beach, Finding Their Zen