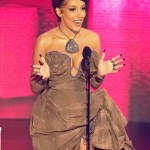 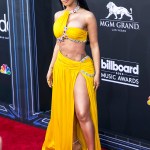 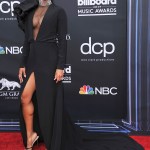 The Billboard Music Awards are almost here! In preparation for tonight’s awards show, take a look back at some of the hottest gowns worn to the event.

It’s nearly time for the 2020 Billboard Music Awards and we couldn’t be more excited! But before the stars step onto the stage to perform at this year’s unique ceremony, we decided to prepare ourselves by reflecting on some of the best fashion moments this show has offered us in the past. From thigh-high slits to plunging necklines, plenty of gowns worn to the BBMAs have been ultra sexy.

In 2018, Jennifer Lopez killed it on the red carpet in this sexy maroon number. On top, she wore a crushed velvet blazer that gave a peek at a matching bra underneath. The Roberto Cavalli creation also featured a snakeskin asymmetrical wrap skirt with a thigh-high slit. The “Waiting For Tonight” hitmaker finished off her ensemble with over-the-knee leather boots in the same rich hue and a metallic clutch. For her stunning red carpet look in 2016, Ciara fashioned this gorgeous, glittering silver gown by Philipp Plein. The dress featured some very dramatic cutouts running along the side of the mother-of-three’s torso. But Ciara worked the look with total and complete confidence. To finish off the dramatic ensemble, Ciara went with a blonde ‘do and worked her fringe to perfection! Just last year at the 2019 Billboard Music Awards, rapper Cardi B totally commanded the red carpet in this yellow ensemble. The color looked impeccable on the “Money” rapper, and the thigh-high slit on her skirt was truly dramatic. The top of Cardi’s outfit featured some stunning jewels, and the fabric connected to a dazzling choker the rapper wore around her neck.

Of course, there are plenty more unforgettable Billboard Music Awards red carpet looks beyond the ones we’ve mentioned! Stars from Taylor Swift to Kelly Rowland have shown off their flair for fashion at the event through the years, and we cannot wait to see what the stars rock on stage tonight! To see more of the best red carpet looks from the Billboard Music Awards over the years, check out the gallery above!