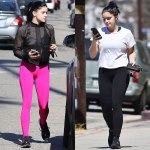 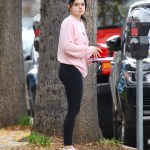 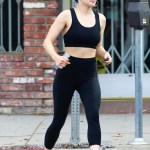 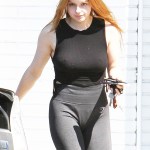 Ariel Winter has been slaying her workout outfits when she hits the gym lately, and her body looks more toned than ever.

Ariel Winter, 21, has been showing off her slimmed down figure every chance she gets lately, and her workout outfits just keep getting sexier. Ariel stepped out to the gym most recently on Monday, April 15, in LA. Ariel chose to show off her long, lean legs in a pair of super short, navy blue $30 Under Armour UA On The Court 4″ Volleyball Shorts paired with a tight black zip-up sweatshirt which she chose to zip up all the way, and her usual black Nike workout sneakers. She threw her black hair up into a messy bun, leaving wisps out in the front, framing her face.

The actress also wore a sexy gym ensemble on Thursday, April 11, when she threw on a pair of high-waisted black leggings with a long-sleeve sheer black mesh pullover with red stitching. Under the see-through top she threw on a black sports bra, putting her tummy on display under the shirt. Topping her look off were a pair of simple black Nike sneakers and she slicked back her hair into a high bun. Meanwhile just one day before, she looked slimmer than ever in a pair of skin-tight neon pink leggings which she paired with a similar sheer mesh top, but this was a zip-up bomber jacket. Under the see-through jacket she rocked a black bra, showing off her toned abs.

Aside from her most recent looks, the Modern Family actress has rocked sexy workout gear a lot in the past. Back in July 2018, she hit the gym with her longtime boyfriend, Levi Meaden, 31, when Ariel opted to wear a pair of super high-waisted black leggings paired with a red and blue color-blocked high-neck sports bra that showed off a lot of cleavage, and her bare stomach. Then, in August 2018, she stepped out in super short black biker shorts that showed off her bare legs, which she paired with a baggy white cotton tank and a blue strappy sports bra that put her cleavage on full display.

The difference between her workout looks then and now, is that Ariel has slimmed down a lot. She recently admitted in a fan Q&A what made her lose so much weight, saying that she was on anti-depressant medications that caused her to retain all of her wait, leaving her unable to lose it, no matter how hard she tried. However, after switch around her medications, she finally found the right one for her, and now her metabolism has come back, causing her to shed all the weight she was previously unable to lose.