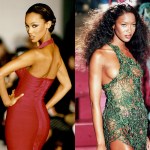 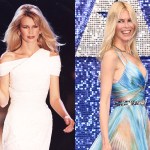 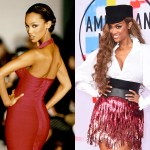 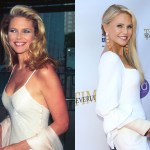 Can you believe Claudia Schiffer just turned 50? We’ll have what she’s having! See her evolution, along with more ’90s supermodels including, Tyra Banks and Naomi Campbell. Most of these women are over 50 now, and they look incredible!

The ’90s were a wild time for fashion, accessories, and style choices, but the decade gave us some of the biggest names in the modeling industry! From Claudia Schiffer to Naomi Campbell and Tyra Banks, these women showed us how to age gracefully. Not to mention, they’ve stayed at the top of their game when it comes to their effortless style and classic looks. In honor of Claudia’s 50th birthday on August 25, we took a trip down memory lane. — See her stunning transformation through the years, along with more amazing models of the ’90s in our attached gallery.

If you ask us, Claudia is simply aging backwards. She rang in the big 5-0 in a formfitting, blue Balmain dress, which was a gift from the fashion house’s creative director, Olivier Rousteing. Claudia donned the cutout, long sleeve number to blow out the candles on her layered birthday cake, as seen in a video she shared to Instagram.

In a candid look through her closet with British Vogue, Claudia donned a slew of sultry pieces at her home. The gorgeous photos were captured by her husband, Matthew Vaughn. Claudia married the English film director in 2002. The couple have three children: son Caspar and daughters Clementine and Cosima.

It wouldn’t be a rundown veteran supermodels without Naomi Campbell. The newly-minted 50-year-old broke onto the scene as a teenager, where she landed her first cover shoot at only 15-years-old! Over the years, Naomi has worked with designers like Prada, Yves Saint Laurent, Balmain, and has even gone more commercial with brands like Express and H&M.

Naomi continues to be a pioneer in the world of fashion and modeling, overcoming obstacles and being dubbed one of the most sought-after supermodels in the world! As she continues her latest business ventures, including interviewing stars like Serena Williams on her YouTube channel, Naomi is only getting started when it comes to building her empire! Although she has matured, Naomi still looks just as glowing and gorgeous as she did two decades ago!

Of course, we also have to mention one of America’s top models — Tyra Banks. In her time since making history by appearing solo as the first Black woman on the cover of Sports Illustrated‘s swimsuit issue, the 46-year-old has ventured into acting with roles in The Fresh Prince of Bel-Air, Life Size, and more. One of Tyra’s greatest accomplishments, however, was creating the reality TV series America’s Next Top Model in 2003.

Tyra hosted and was a judge on the show for over 300 episodes between 2003-2018, while also balancing her own talkshow from 2005-2011. With all of this valuable experience, Tyra will undoubtedly make for an enthusiastic host when Dancing With The Stars finally returns for its 29th season. Upon discussing her new role during her interview with Good Morning America on July 15, Tyra assured fans that “it is going to be so next level. We’re doing all this crazy stuff, taking it to the next level, but still like keeping the stuff that we know America loves,” she continued. “But you need to get ready because it’s going to be different,” she teased.

There are plenty more incredibly stunning models like Claudia, Naomi and Tyra who have gone on to flourish beyond their ’90s modeling careers! To see more of the gorgeous models from the ’90s then and now, from Christie Brinkley to Bridget Moynhan and more, check out the gallery above!