There’s the pop hook that enters your ear and never leaves. There’s the killer verse that elevates a rap track into a hip-hop classic. And there’s the guitar riff that transforms a rock song into an anthem. For Myles Kennedy – singer, songwriter, and vocalist in Alter Bridge – the band’s seventh album, Pawns & Kings, is his master’s thesis in riffology, a work that saw him take his guitarmanship to the next level. “It was interesting on this record, for whatever reason, I just had a lot more [riffs] —  not that I didn’t bring in heavy riffs in the past,” Myles says when discussing the album with HollywoodLife.

“I used to have a guitar tech at the bottom of his emails, in the sign-off, the quote was ‘the power of the riff compels me.’ And I always thought that was so true,” he adds. “Because a good riff, there’s something so captivating about it, right?”

A good riff can do wonders for your health. It can also change your life, as seen with Myles – who has been traversing the world alongside Mark Tremonti (lead & rhythm guitar), Bryan Marshall (bass), and Scott Phillips (drums) for almost twenty years. Had it not been for one faithful day as a youth, he may not have been set upon this path of rock glory.

“The first riff I can remember,” he says, “I was a kid, leaving daycare. I get in the car, and my mom’s got the radio on, and [Deep Purple’s] ‘Smoke On The Water’s on the radio. This was a long time ago, mind you, and I just remember being so like, ‘wow, what is that?’ It just kind of sucks you in. So, I do love a good riff, and for whatever reason, on this record, it felt like the well was just brimming with riffs, at least, from my angle.”

“But Mark, he’s always got riffs. He’s a riff master, you know?” says Myles. “So it’s fine when you’ve got all these ideas to wade through. We had plenty of riffs to choose from.”

Before the release of Pawns & Kings, Mark revealed that “some of the heaviest riffs on the record” came from Myles (h/t Blabbermouth), while in the past, Mark was the heavy writer while Myles was more introspective. “Yeah, I think to some degree,” says Myles at this. “Early on, we kind of had our roles. Each of us had our strengths, and that’s what we would bring creatively. ”

Related: ‘Dexter: New Blood’ Season 2: The Latest On Whether Or Not It’s Happening

“What’s been interesting as time has gone on — you know, we’ve been together nearly two decades —  you start to kind of become one living breathing unit, and you start to assimilate the other writers’ characteristics, you know — sonic traits,” he says. “You kind of integrate that into what you do as well.”

This synchronicity between the creative polarities has produced what might be the definitive Alter Bridge album. From the pulse-pounding opener (“This Is War”) to the epic closing track, Pawns & Kings showcases the band’s skill as songwriters. It’s also a monster of a rock album, bursting with soaring vocals and surging guitarwork.

Chalk this dynamic entry into the band’s catalog to the simple act of turning on an amp. “The way I write now is a little different,” explains Myles. “The idea of plugging in when you’re writing, that was something I didn’t do a lot. I would take my guitar into a hotel room and just like, ‘Oh, I’ll get the idea. As long as I’ve got six strings and a guitar pick, and I can hear what’s going on.’ But, it is different. Once I’ve started plugging in more, then I would sit in my studio and program grooves to play over and over. That started to inform me differently.”

“You hear this massive wall of sound of what you can do with modern technology,” he explains. “It would inform me differently than when I would just sit there and plying around acoustically. I think that was something that started for me a few years ago. I brought in a fair amount of riffs on Walk the Sky as well, and it was because of that process that really changed how I wrote, which was a good thing.”

“When Mark, I, and the whole band were thinking about the kind of record we wanted to make, we did want to make it a little less interesting,” Myles says with a caveat. “A little less Phil Spector than it had been in the past, because we had gotten a little bit [complex.] And that’s the thing with multitracking now. You can do so much. You get into the studio, and then you lay it down, and you’re like, ‘what if we have this melody going here? And what if we do this here and add this texture here?’ And before you know it, you’ve got this wall of sound and Phil Spector thing, right?”

While the band didn’t want to go the route of the man responsible for the famous “Wall of Sound,” Alter Bridge did find a trusted producer to helm their new album. “We decided, ‘let’s rein it in. And we’re not going to let ourselves get carried away. We got on the horn with [producer] Michael ‘Elvish’ Baskette, and he was on the same page. So, I think that was it,” says Myles.”

This process of plugging in also made songs that are “a little easier to replicate” in a live setting, says Myles. “Here’s the problem for me as a singer and a guitar player. With the songs I brought in, I would establish the musical foundation first before putting the melodies on top of them.” When rehearsing for their upcoming 2023 North American Tour, Myles found himself “cursing myself a lot.”

“Even though I’ve tried to strip these [songs] down, I’ve created these guitar parts. It’s like patting the head and rubbing the belly at the same time. ‘How are you going to sing it?’ Because I would come up with the melody after the fact, when you’re not sitting down with a guitar; you’re sitting there with a microphone and singing along with your demos.”

While learning how to do two things at once is a pain, Myles shares that there were some “happy accidents” in the making of Pawns & Kings. “Those are often my favorite moments,” he says. “To some degree, the last track [“Pawns & Kings”] is interesting because it wasn’t even going to make the record.”

“That was something that I’d been messing with for months. I had all these parts and this grand plan, and it was just basically six minutes’ worth of whatever. So, after everyone put up their demos, Michael, our producer, was like, ‘Hey Myles, do you have anything else?’ And I’m sure he did the same thing with Mark. ‘Do you have anything I haven’t heard?’ And I sheepishly played him that, and he’s like, ‘Well, we’re gonna get that going. That’s gonna go on the record.’ I’m like, really? He’s like, ‘Yeah!’ So, little did I know that it would end up becoming not only the first thing that we would release but also, it would punctuate the record. So, that was a happy mistake in that sense.”

“And what I’ve learned, time and time again, is you get so immersed in the creative process, and you can either think something’s better than it actually is or something is not up to par. So, it’s nice to have people that you trust – your bandmates or a producer – that can say, ‘hey, that’s good’ or ‘hey, that’s bad. It’s like there’s no ‘i’ in team, right? It’s that teamwork, with everybody weighing in with their ideas.” 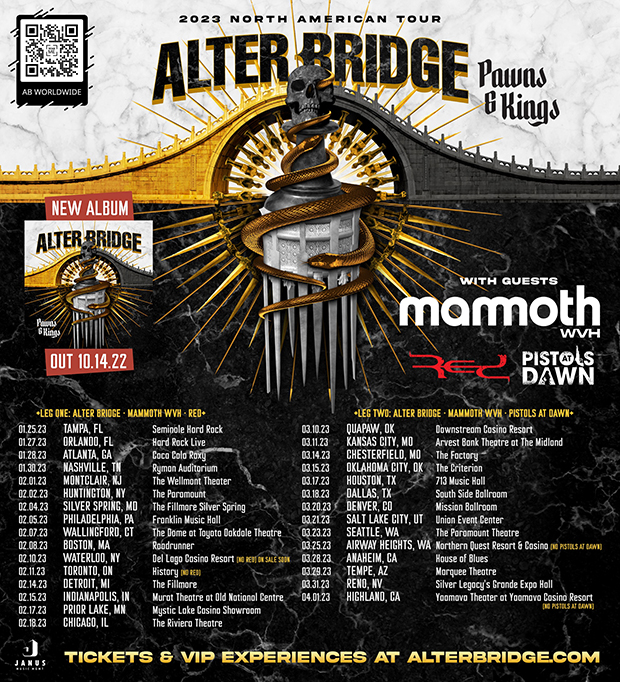 That sense of teamwork and humility has already resulted in a successful European tour. The band wrapped up a visit overseas with Halestorm and Mammoth WVH. The group begins its 30-city North American tour with Mammoth WVH on Jan. 25, with Red playing the first leg and Pistols At Dawn on the second. Tickets are on sale now.

Pawns & Kings is available on streaming services and in stores.

Eddie Van Halen: Photos Of Rock Legend Through The Years