Selena Gomez recently caught wind of a Nov. 2022 TikTok that commented on her weight during her relationship with Justin Bieber. The video, which you can see here, featured photos of Selena during the years she was with Justin. The video begins with a message across the screen that reads, “The reason why Selena is always skinny when she dates Justin.” It then flashes to a screen shot from a seemingly years’-old Instagram post, where Selena responded to a fan about one of her breakups from Justin. 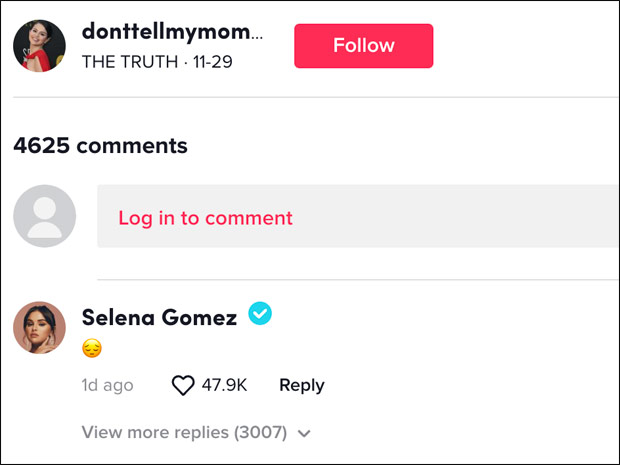 The fan explained, “Selena Gomez posted a beautiful selfie earlier and I commented to her, ‘Justin Bieber really messed up. I still love both of you though, Jelena forever<3.” She then shared a re-post of what Selena reportedly said back to her message. “No love. [He’d] rather models. I’m just too normal,” Selena allegedly wrote. In the present day, though, Selena seemed to confirm that the screenshot was legit, as she commented on the TikTok with a sad face emoji. She didn’t expand further than that, but her simple comment received a lot of attention.

Selena and Justin dated on and off from 2009 until 2018. Following their final split, Justin reconnected with another ex, Hailey Bieber, who he went on to marry in Sept. 2018. Selena and Hailey had been pitted against each other for years, but confirmed there was no bad blood between them when they posed for photos together at an event in October.

In April, Selena got candid about her body image in a TikTok video, which was targeted towards body-shamers. “Honestly, I don’t care about my weight because people b**** about it anyway,” Selena said. “‘You’re too small, you’re too big, this doesn’t fit, meh meh meh.’ B****, I’m perfect just the way I am. Moral of the story? BYE!”

Selena had a kidney transplant in 2017 and has been battling lupus flare ups for years. She previously explained that the medications she has to take has caused her weight to fluctuate from time to time. “For me, I really noticed when people started attacking me for that,” Selena said on the Giving Back Generation podcast in 2019. “[The comments about my weight] got to me big time. It really messed me up for a bit.”