Not many bands can say they’re putting out some of their best music after nearly 60 years together, but not many bands are like The Cowsills. Formed in 1965 by brothers Bob, Bill, and Barry Cowsill, the group would become pop culture icons with both their music (“The Rain, The Park & Other Things,” “Hair”) and by inspiring The Partridge Family, after siblings Paul and Susan Cowsill joined the group, along with their mother, Barbara. “When we were children, when we were kids, we were in the thick of it,” Bob Cowsill tells HollywoodLife in an EXCLUSIVE interview ahead of the group’s first album in 30 years, the dynamic Rhythm Of The World (out tomorrow (Sept. 30) via Omnivore Recordings)

“Susan, my sister, was eight years old,” shares Bob. “I was 18. Paul, he’s, he’s 16. And we’re kids. We don’t know if anyone’s even looking at us. You know what I mean? But, we were holding our own. And, all these years later, we’ve met all these peers and all these wonderful people that actually liked us back then.”

It turns out many people like the Cowsills, including four leather-jacketed boys from Queens. “We were going on The Howard Stern Show,” Paul Cowsill tells HollywoodLife. “We’re outside of The Howard Stern Show, getting a bit of fresh air in the city, and all of a sudden, this big ol’ limo drives up, parks on the side of the road, and out of this car comes The Ramones. And you can hear ‘Gray, Sunny Day‘ – they were playing us in their limo as they came to Howard Stern to do their bit. And they got out and were like, bowing down to the Cowsills.”

“They were fans of The Cowsills,” continues Paul. “The drummer, Marky Ramone, wanted to drum with us because him and his girlfriend had their first kiss to ‘Rain, The Park, and Other Things.’ And he asked if he could drum, so our drummer, Russ, went, ‘well, yeah man. You want to drum? You can drum.'”

“We all play locally when we’re not together,” says Bob. “I was with my cover band, playing a Valentine’s dance at a country club. Joe Pesci is there. Joe comes up to me and starts singing ‘Heaven Held,’ which is a song from We Can Fly, our second album. And here’s Joe Pesci telling me what a fan he was of us. And I’m fanning out talking to him.”

“I remember,” adds Susan Cowsill, “it was in the nineties. And my favorite was The Smithereens because I always thought they were just a really cool band, and when I found out they were Cowsills fans, I absolutely never would’ve thought that. And then they invited us to come to sing on their record [Blow Up]. And that was cool – and Melissa Ethridge, Marry Chapin Carpenter –”

One doesn’t need to be a Rock & Roll Hall Of Fame inductee to appreciate The Cowsills’ music. One needs to put on Rhythm Of The World when it arrives on Sept. 30. Produced by Dr. Rock Positano, the 11-track album features crisp vocal harmonies set against some of the most charming rock music of the year. From the energetic opener (“Ya Gotta Get Up!”) to the enchanting title track to the haunting closer (“Katrina”), Rhythm Of The World is a testament to the band’s talents as singers and songwriters.

It also is a celebration of the music that made the Cowsills part of the foundation of rock and roll. Instead of chasing the latest music trends, Rhythm Of The World realizes that the core sound that made The Cowsills successful has never gone out of style. With elements of heartfelt pop, early psychedelic rock, western-kissed twang, and new wave, Rhythm Of The World is ultimately a collection of pure, good music.

“We didn’t have record companies, we didn’t have hit records for decades, but we were active,” says Bob, “and we are where we’re supposed to be, artistically. We’re catching people up on the journey. So, our roots spill all over this album, and we let them because we’re part of them ourselves now. It’s just a big hodgepodge of what that was all about.”

“We are the people who started in the sixties,” says Susan, “and we are the people who lived through the seventies and eighties and nineties. All the music, we loved it and absorbed it. And then, it would stand a reason that when we stepped up to the plate again, that’s what came out. For me, The Cowsills have always been authentic, whatever that was – even when we’re given something that maybe we didn’t write, didn’t pick, didn’t necessarily want to do, but we’re doing it.”

This commitment to authenticity, which is all over Rhythm Of The World, allows The Cowsills to create a sound that reflects the decades they’ve existed while still sounding fresh.

“Musicians don’t think about what label somebody’s music is in,” says Paul. “Musicians can just hear it for the music, and they can go, ‘Oh wow, I dig that. You know? Oh, that’s kind of cool. Wow. Check those vocals out.’ It’s the others that will jam up on that and go, ‘Oh look, he’s trying to do that.'”

Perhaps the most poignant moment on Rhythm Of The World comes at the end with “Katrina,” a song written about the passing of Barry Cowsill in the hurricane of the same name in 2005. With guitarwork invoking memories of Jimi Hendrix’s “Third Stone From The Sun” (itself reportedly containing a lament for Dick Dale, who Hendrix thought was dying at the time), the song sees The Cowsills process the loss through the filter of their music.

“As artists, of course, your first thought is, ‘who’s gonna write ‘Katrina?” says Bob. “Between us, we would have conversations, but it just took years to get to the point. That’s a very difficult assignment. And when it happened, the lyric came kind of in this first-person crazy way. So the timing of it seemed okay, uh, as the story unfolds where we’re all finding out kind of what happened to this guy. You know, he tried to get out — he couldn’t of course. And, the things those words are from him – ‘the looting and the shooting’ – they were taken from phone messages from him.”

“So, it’s a musical memorial,” he continues. “It tells the story that he died in the wave, and musically, he’s brought to heaven in the end, and there’s an ascension.” Bob admits that the song will be “difficult to sing” to an audience, but he says he’ll “Just think of other things, like baseball or something.”

“It’s even hard to talk about,” adds Susan. “One thing I wanted to say about that particular recording. It’s not just Bob, Paul, and I grieving for our brother. Two of our band members are from Louisiana. So, when Russ and Mary are playing that song, they’re getting it out of them. They lost people, too.”

“The song is, since we’ve started chatting with folks, it’s so much bigger,” she adds. “These songs, sometimes they’ll come to us out of nowhere, aren’t exactly from our brains or our perspective. And you got to wonder what the heck’s going on. I know Bob experienced that with ‘Katrina,’ and I did too.”

“Some songs take years to write,” adds Bob. “Some songs can fall in your lap 15 minutes, and all writers know about that.”

Fans won’t have to wait years to hear Rhythm Of The World in person (which is good since they’ve been waiting thirty years for this album. First, the band will partake in the Andy Williams Christmas Show at the Andy Williams Moon River Theatre in Branson, Missouri. With 2023 comes the promise of new Cowsills shows with new fans. 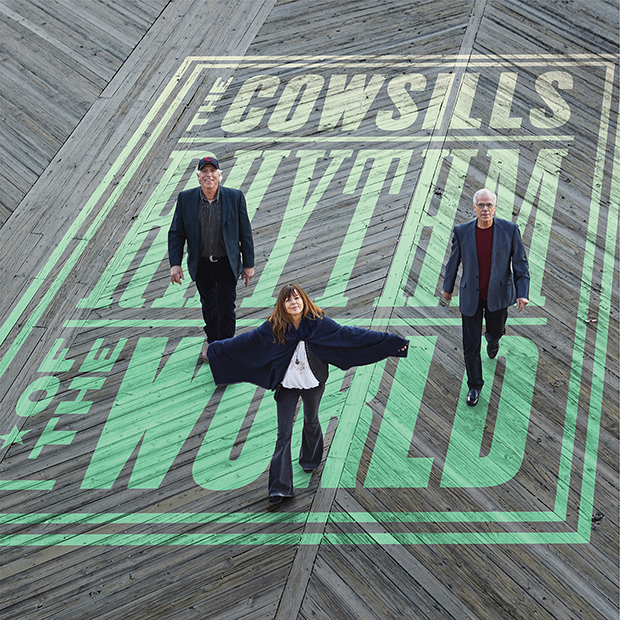 The new year will also bring the band closer to their 60th anniversary. And what would the young Cowsills say to that? “My teenage self would say, ‘Don’t give up. Never give up. Have a job, but try to see the dream through,” says Paul.

“If you had told me at 11 or 12 when this band first broke up,” says Susan, “that I was still gonna be in this band with these guys, I don’t think I would’ve thought that. And now, as my life unfolded, I knew exactly that that was the case. But back then, I don’t think so. So how fun.”

“We thought those thoughts when we were young musicians,” says Bob. “We would jokingly say, ‘If I’m doing this at 40, somebody get me off that stage immediately!’ Cause we all thought that was way old. And look what we’re doing. I mean, are you kidding me? If somebody told me, ‘No, Bob. The songs you’re doing today, they’re going to help you through the decades. They’re going to be there for you in the end,’ I would say, ‘what movie are you writing?’ And yet, here I am. So what can I say?”