“I would say the emotion that will really stick with me from Pride 2022 will be excitement,” Shea Coulée says to HollywoodLife when looking back on the past four weeks of Pride Month. After Pride was canceled or went virtual in 2020 and the soft-reboot happened the following year, June saw the annual remembrance of the Stonewall Uprising (and the celebration of what the LGBTQ+ community has accomplished since then) come back in full force. “I feel like people are just excited to be visible and out in the world,” said the RuPaul’s Drag Race All-Star winner, “celebrating themselves, celebrating their authenticity.”

That celebration of authenticity is why Shea partnered with Smirnoff to help announce the Show Up. Show Off! competition. With a lineup of all genres of talented drag performers, Show Up. Show Off! will take place over the next few months at a series of brunch-themed events, culminating in an October finale in New York City. “I hope that we’ll be looking back at this [moment] thinking, ‘Wow, what an exciting time that was to be able to add an additional platform to the community for so many talented drag artists to come and show us exactly what they’re made of.'”

It’s been said that June and October are often the busiest times for a drag queen, so Smirnoff tapped into some drag unconsciousness (“dragconsciousness?”) with this schedule. “I am a firm believer in divine timing,” she tells HollywoodLife, “So it just happened to be that this all came to fruition right at the perfect time. And I’m so glad we were able to announce this in June and then wrap up the program in October because — June and October are very busy months. Pride and Halloween are probably the most ‘look-specific’ holidays we [drag performers] have. So there are a lot of illusions that are going on during those months.”

“I’m excited to see what the contestants for the Show Up. Show Off! competition brings us throughout these next few months,” she adds. “You know, we say it a lot of times in the drag community – that drag queens are normally born at Pride or on Halloween.”

Similarly, Smirnoff’s commitment to the LBGTQ+ community is all year-round. The brand has a longstanding history of championing inclusivity and supporting the community, which is why it has been a staple of Pride celebrations and Halloween parties (and all bashes in between.) As for what a “Shady Coulady” cocktail might taste, Shea flips the script.

“As exuberant and as fashionable as my drag is,” she says, “when it comes to my cocktails, I like something that’s really clean and classic. I love Smirnoff’s 21 vodka, you know, their classic vodka. I would probably mix that with lemonade because I love citrus. If we’re thinking about like summer, probably lemonade, a beautiful citrus, and then maybe just like a touch of like a ginger beer for an added spice.”

“If I’m really trying to get crazy and I really wanna be like a flavorful drink, then I would probably use [Smirnoff’s] Peach Lemonade vodka with lemonade, cause it’s nice and sweet, but then you can add the acidity of just like a normal lemonade, to kind of cut through that. And it’s just like really nice and refreshing.”

As to what kind of drag Shea wants to see birthed over the months of the Show Up. Show Off! competition, Shea says, “I love all types of drag. I think the two things I gravitate to the most are someone who has a strong, clear point of view. And then, someone who really understands the element of surprise.”

“I love thinking or expecting one thing and then getting something else,” continues Coulée. “I love people who are able to, within their performance and their drag, really flip my perspective about them.” Besides that? Shea just loves drag.

“I love drag Kings. I love AFAB Queens. You name it. I love alternative drag. I love pageant drag. I love drag. So I’m excited and hoping to see so many varied representations of drag in this competition.”

When asked what it is about drag that draws Shea, she says that the art form is “just a big middle finger to the patriarchy, and I love that. I love it.” 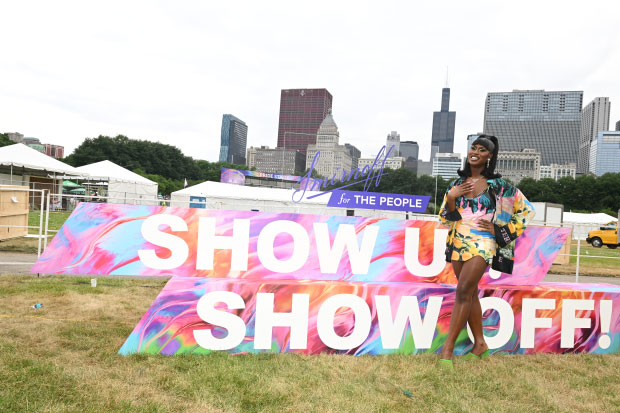 “Like,” she continues after a laugh, “they’re so afraid of our art form that they’re trying to create legislation to keep us away from children and fear that we might corrupt or confuse them.” Shea’s mentioning of the Drag Queen Story Hour, where colorful characters show children the power of reading, has been caught in the metaphorical crossfires of the new culture war – and in the case of Sunday (June 26), literal ones. Members of the Proud Boys protested a Storytime at a library in Sparks, Nevada. Towards the end of the event, a man wearing Proud Boy clothing approached the library with a rifle, per The Advocate. Earlier in the month, Proud Boys interrupted a Drag Queen Story Hour at a library in California and hurled homophobic slurs.

“God forbid we don’t subscribe to your archaic puritanical belief systems,” says Shea about the power of drag. “I love the fact that we’re disrupting the system. To me, that’s my favorite part. The rebelliousness  that lays at the foundation of it.”

Tune into exciting news to come including delicious drink and drag content by visiting Smirnoff.com/en-us/Show-Up-Show-Off and following @Smirnoff on Instagram. And no matter how you decide to Show Up, and Show Off, please remember to drink responsibly.