Normani isn’t a featured performer on Chris Brown‘s new song, but she’s all over the music video for “WE (Warm Embrace).” In the visual heralding Chris’s upcoming BREEZY album (out June 24), the 33-year-old entertainer meets up with Normani in his home after having trouble sleeping. Normani’s character is the woman Chris has been dreaming of, and the two begin a seductive dance that results in Normani straddling Chris’s knee.

Just as the action heats up, Normani and Chris decide to cool off with a swim. With the video’s theme of “falling,” Chris falls for Normani — or in this case, with her —  into a pool. Normani shows off plenty of skin as her revealing dress gets soaked, while Chris keeps his clothes on. After some underwater flirting, Chris and Normani are back on dry land, dancing and snuggling in his car. Then, a UFO comes to whisk Normani and Chris away. 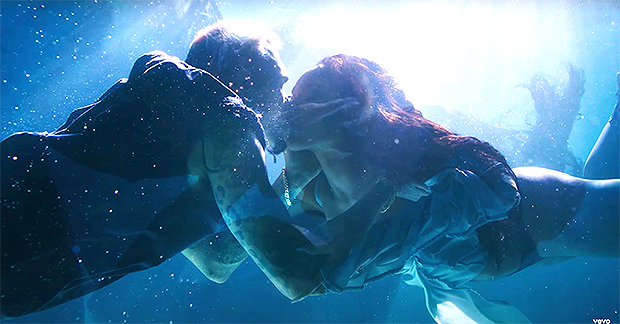 The video ends in space, like how it started, though the fate of the two remains unknown. Was Normani an alien sent to Earth to capture Chris’s heart? Was Chris dreaming he was falling at the start of the video or was he reliving past abductions? Who is going to clean the pool?

Chris Brown and Normani finna break the internet 😭 the snapped so hard WARM EMBRACE is so good pic.twitter.com/C5VCTQuUnM

THERE IS NO WAY THIS IS REAL. I AM ACTUALLY GOING TO CRY.

CHRIS AND NORMANI. IN A VIDEO TOGETHER. OH MY GOD pic.twitter.com/uOvbeGgu4x

“WE (Warm Embrace)” was directed by Arrad, and the video kicks off with a sneak peek snippet of Brown’s track “Sleep At Night.” The video comes on the heels of his new single, “Call Me Every Day,” which paired Chris up with rapper WizKid. “WE (Warm Embrace),” “Call Me Every Day,” and the previously released “Iffy” will be on Chris’s upcoming album, BREEZY. The project, out this Friday on RCA Records, also includes appearances from H.E.R., Jack Harlow, Fivio Foreign, and more. Fans will also get to hear the songs live when Chris hits the road for the One Of Them Ones Tour with Lil Baby. (Click here for more info.)

Normani’s appearance in this video comes months after dropping “Fair,” her emotional new single. “What makes it so special was… it captured me in the moment as I was experiencing,” she told Zane Lowe on Apple Music 1. “In real time. I was going through it emotionally that, that day, I wasn’t sure if I could even really pick myself up to go to the studio. But ended up, and this was a result. And it’s therapy for me. As much as it is for everyone else, it’s for me. It’s really crazy that putting this record out. I didn’t know that it was going to be for me too.”

“I’m so proud of how it was written and the way that we were able to…,” she added. “You could tell this was written by all females, right? We really just poured our hearts out to each other, and we really all went through the same experience. So it was a lot easier for the lyrics to just come out. It was like floodgates. And that’s what we did. It was more so therapy. Girls just pouring their hearts out to each other.”