Jamie Lynn Spears (sort of) congratulated her sister Britney Spears on getting married to Sam Asghari, despite not being invited to the ceremony. The Zoey-101 star, 31, “liked” a post by E! News on Instagram about the June 9 wedding. The post featured a photo of Britney with guests Selena Gomez and Drew Barrymore, and Jamie Lynn hit the ‘like’ button to show her support. 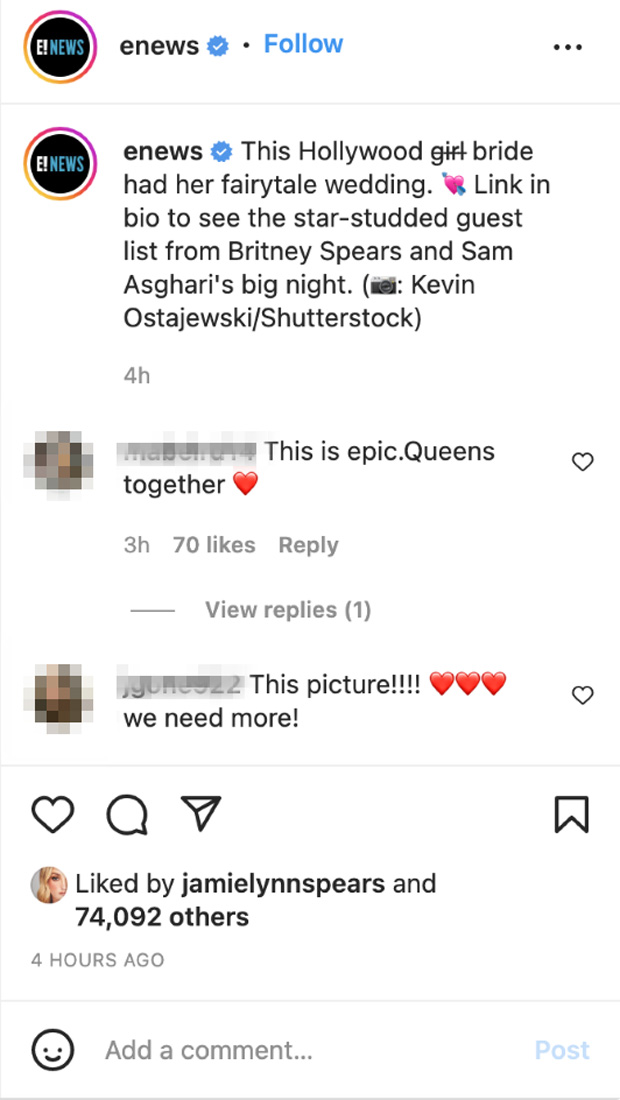 Jamie Lynn wasn’t the only family member excluded from Britney’s nuptials, though. Their dad Jamie Spears, 69, and mom Lynne Spears, 67, also didn’t receive an invite. Britney’s brother Bryan, 45, was reportedly there. Her sons Sean, 16, and Jayden, 15, didn’t go, which their dad Kevin Federline confirmed hours before the ceremony took place.

There’s been a lot of drama in the Spears family due to the abusive conservatorship that Britney was under from 2008 until late 2021. Britney and Jamie Lynn have been estranged for years, but their feud became public once Jamie Lynn started promoting her tell-all book Things I Should Have Said amidst Britney’s battle to end the conservatorship. The siblings went back and forth on social media as Britney accused her little sister of being “scum” and “lying” about stories in the book. Jamie Lynn responded by insisting that her book isn’t about Britney and that she’s received “death threats” over the public drama.

It appears that Britney and Jamie Lynn’s relationship is fractured beyond repair. However, Jamie Lynn did show some love to the “Gimme More” hitmaker by “liking” her post where she announced that she was pregnant in April. Sadly, Britney miscarried the baby and she and Sam shared the tragic news on Instagram in a post that Jamie Lynn “liked” as well.