Wait, is Fat Joe really going to run a marathon? Like, an actual marathon? “I have an avatar in there,” Joe tells HollywoodLife when discussing his role in the Degree Metathon, the world’s first marathon in the Metaverse. The Apr. 26 event, taking place at 6 pm EDT in Decentraland, aims to raise awareness about diversity issues plaguing these virtual worlds. The event will run 26.2 virtual miles through Decentraland’s Vegas City Sports Quarter, and Joe will be among the competitors.

“That’s a whole lot, but I let my avatar do the work for me,” Joe tells HollywoodLife over Zoom. “It is just a beautiful opportunity. I always try to be ahead of the pack, to try new stuff and be involved with everything that has something to do with positivity and progression.”

Having Fat Joe as an avatar – literally – of positivity and change makes all the sense in the world. The “Lean Back” rapper has endured adversity after adversity and has come out of the other side of Hell with a positive attitude. Fat Joe looks upon the world and sees both its flaws and potential, which is the spirit he’s bringing to the metaverse with this partnership. “The way I look at the metaverse is [right now], we’re on the iPhone 1,” he says. “It’s only going to get better. It’s only going to get more technical. It’s only going to get bigger, and I’m glad to be at the forefront of it. And I thank Degree for bringing me in on this and helping me be a part of it.”

The Degree Metathon — which will also see Paralympic athlete Blake Leeper run the race, highlighting how people with physical disabilities have issues accessing the metaverse – will advocate for greater inclusivity in user experience. This means creating options for people with vision implements, allowing people to make a non-binary character and to have a wider variety of body shapes, sizes, skin tones, and more.

There’s a hint of frustration and sadness in Joe’s voice when he speaks about these issues. These metaverses promise a chance for anyone to fully live their truth but still come with the same baggage as the real world. “We know we come from a racist history,” says Joe. “There’s a lot of racism in America — and we’ve been working towards ending  —  but the sad part is when you go on the metaverse, they talking about they have diversity issues, and it just started. And so, people are bringing in the old world into the new world.”

“Which, I like to thank Degree for having the courage to be on the front line,” he says. “And then they went and got the guy with the biggest megaphone in the world, Fat Joe, who ain’t scared to talk and to tackle some of these issues. So I’m honored to be with that, and I’m honored to be in the metaverse and the marathon. It’s going to be a beautiful thing.” 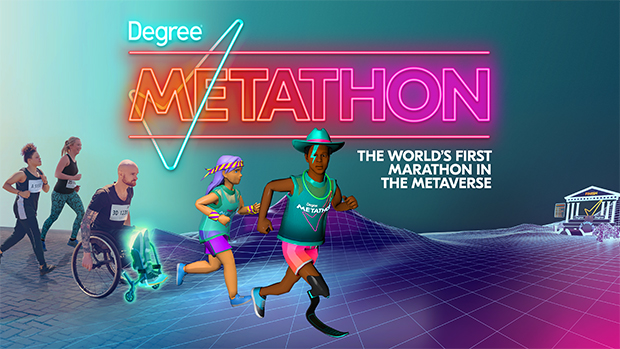 This is not the first time that Joe has used his megaphone. In recent years, Joe has become an elder statesman of hip hop and a guide doling out wisdom to the younger generation. “We got to just represent and be the voices of the voiceless,” Joe tells HollywoodLife. “I remember growing up in the south Bronx and having my issues, but nobody would listen to me at the time. I wasn’t famous. I wasn’t Fat Joe. So I think we have an obligation — we have a big commitment to the voiceless.”

“May that be in justice reform or may it be somebody with a disability being overlooked or somebody being overcharged at the hospital going in debt for prices they know nothing about,” he says, bringing up his partnership with Power To The Patients for greater hospital price transparency. “I like to always engage in speaking up for those who can’t really speak up for themselves.”

One look at his Instagram, and it’s clear what matters to him: family, community, and music. Joe and HollywoodLife’s chat comes days after DJ Kat Slay passed away following a battle with COVID-19. A day before our interview, Joe shared a photo of him with LL Cool J and Busta Rhymes with a Tats Cru mural memorializing the hip hop legend.

“Yeah, mural. We did a whole train tribute,” says Joe. “Now this guy was a pioneer, an icon of hip hop. He was in the first hip hop movie ever done called Style Wars. So we got introduced to Kay Slay as Dezzy Dez, a graffiti writer. Then, over the years, he became a big, big radio personality and mixtape DJ. He helped launch a lot of careers like 50 Cent and Diplomats, which is Cam’ron and Jim Jones.”

“Without him, a lot of us wouldn’t be where we at,” explains Joe. “And the thing that was so beautiful about him is he was consistent. We all go through ups and downs. One minute we’re the hottest rapper. The next minute we’re lukewarm. We got to become the comeback kids. During through the whole process, this man always remained consistent and always showed us the same love and treated us the same way. And we’re going to miss him because he was one of one.”

Joe will share more stories about his life and experiences in his upcoming memoir, The Book of Jose. “It covers from my birth to where I’m at now,” he tells HollywoodLife. “And it’s a lot of… It’s just a story of courage. Every time they tried to back me down where a normal person would just comply, I always showed courage and relentlessness to win. No matter what’s thrown at you.”

“My brother — drug abuse, he went blind from it. My sister lost her life giving birth to a baby. Me and my best friend, my artist, Big Pun, passed away. It’s just so many things that when you read the book and at the end of it, you going to be like, ‘yo, this was so deep. And how could this guy keep a smile on? How could he greet everybody with love? He’s been through so much in life.’ And I just want to just get people who are in a jammed-up situation and going through a rough time to read my book and know that anything’s possible.”

“Yesterday, I just went to a funeral for a good friend, Kay Slay, and it lets you know the vulnerability of life,” continues Joe. “How you can be here one minute and gone the next. I just felt like my story was something that could uplift the people. Turn the negative into a positive. My life is all about never giving up. I got kids. One of my sons, my eldest son Joey is autistic, on the spectrum. So we dealt with a lot with Joey and my other kids. And I just want to influence the generation that comes behind me and let them know, ‘Hey, I went through the same thing you went through, and you can make it happen.’”

Those interested in taking part in the world’s-first Metathon™ can visit the Events Page on Decentraland.org to register for the event on Tuesday, April 26, 2022, at 6 p.m. EDT.