“I don’t have beef with Kim [Kardashian],” Kanye West wrote, in all caps, at the start of one of the Instagram posts he shared on Monday (Feb. 14). The message came after Ye, 44, spent the weekend attacking Pete Davidson and an hour before Ye encouraged his followers to verbally harass the Saturday Night Live star. “I love my family, so stop that narrative. I’m not giving up on my family,” wrote Ye. Along with his lengthy message, the “Off The Grid” rapper shared a photo of Kim, 41, exiting a car in a floor-length silvery fur coat. “I bought this coat for Kim before SNL. I thought it was particularly special.”

“I have faith that we’ll be back together,” wrote Ye, who added that he has “love for everyone in the media” covering the breakdown of his marriage. “I speak directly to the media outlets the same way a ballplayer speaks to the refs. The world is our court, like a basketball court, and the court of public opinion. We have a public relationship because we are public figures. So, to the public and to the press, sometimes people call me crazy, but to be in love is to be crazy about something and I am crazy about my family. Happy Valentine’s [Day].” 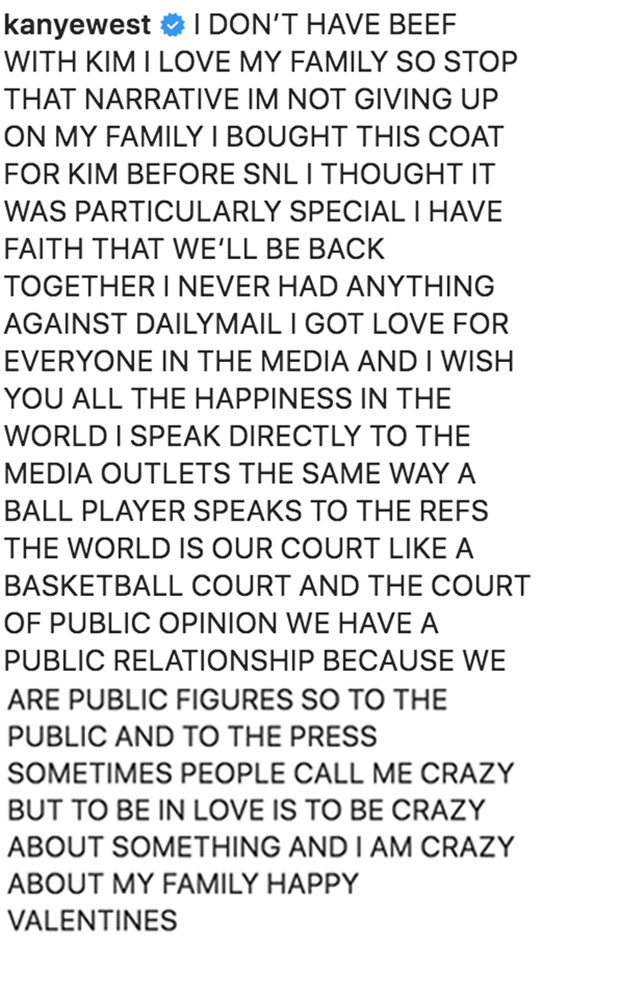 While Ye said it was all love in that post, he wrote something different an hour before it went up. “Thank you guys for your support,” he wrote, again in all-caps like he was spelling out MADVILLAIN’s name. “My family means more to me than any other accomplishment in life. If anyone loves me and my family, if you see Skete [Pete Davidson] in real life, scream at [the] looser(sic) at the top of your lungs and say ‘Kimye Forever.’” 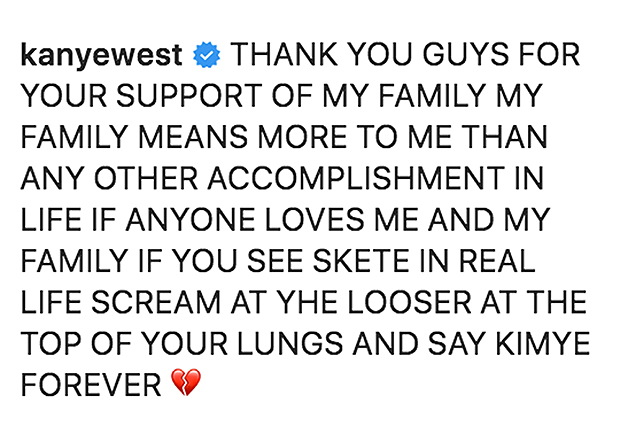 Ye’s attack on Pete kicked off on Friday, Feb. 11, with the release of Fivio Foreign’s “City of God.” Ye appeared on the track and used his verse to take a shot at his wife’s boyfriend. “This afternoon, a hundred goons pullin’ up to SNL / When I pull up, it’s dead on arrival / They act like they love me, they don’t even like you,” Ye rapped. Kanye later unveiled his “Skete” nickname for Pete and posted a (now-deleted) picture of Davidson that mocked his outfit. “I wonder if Instagram [is] gonna shut down my page for dissing Hilary Clinton’s ex-boyfriend?” wrote Ye. He later posted a photo of Pete’s tattoo of the former Presidential candidate.

After that, Ye dragged in Disney and Pete’s BFF, Machine Gun Kelly, into the feud. “This ain’t about Skete, people,” Ye captioned a now-deleted image of him, and Pete photoshopped into the Venom: Let There Be Carnage poster. “It’s about selling y’all a narrative. Skete is just playing his part in Frozen 3, [except] it’s not in the theatres. This time, it’s on [Daily Mail]. Tell Bob [Iger] and the entire Disney staff you [wasted] your money on Star Wars and Marvel because even though it makes money, you will never control the high schools. No one ever heard a Machine Gun Kelly song, Bob.”