Is rock n’ roll dead? Though no new rock or metal albums made Billboard’s year-end chart for 2021, reports of rock’s death are greatly exaggerated – at least, to ’90s band Lit. “I think there’s a cool thing happening right now,” says lead vocalist Ajay Popoff, when he and the band’s guitarist – brother Jeremy Popoff – spoke EXCLUSIVELY to HollywoodLife about My Own Worst Enemy, The Podcast with Osiris Media.

The four-part retrospective docuseries on the group’s defining hit had Ajay, Jeremy, and bassist Kevin Baldes look back when their song “My Own Worst Enemy” could become a generation-defining anthem…and they see a lot of similarities in the music landscape of today.

“A lot of the [music] coming out does sound fresh and new, but it’s very influenced by late ’90s, early 2000s,” says Ajay. “Whether it’s punk-pop, emo, just that stuff, it’s coming back. Some of it’s gone mainstream already with like Machine Gun Kelly and Mod Sun — it sounds very pop-punk to me.” Jeremy, who has spent the last three decades playing the lead six-strings in Lit, was quick to agree.

“Guitars are coming back,” he tells HollywoodLife with enthusiasm. “Rock is coming back. It’s cool to be ’90s. Five, ten years ago, people would throw that term out as almost like, ‘You’re a nineties band. So, go away. Die already.’ Now, it’s like, ‘Whoa. Shit. ’90s was cool.'”

This isn’t just some rose-tinted nostalgia talking. Artists like beabadoobee, BLACKSTARKIDS, Kenny Hoopla, Tai Verdes, Meet Me @ The Altar, Sueco, The OBGMs, grandson, Inhaler, Mammoth WVH, Bones UK, Dirty Honey, and black midi are just some of the bands and artists who have recently made a splash for themselves, releasing music that proudly incorporates elements of rock and punk. When thinking why ’90s rock is coming back, Jeremy says there’s something “sonically” missing from modern music, and GenZ is hungry for something different.

“It’s so easy to make recordings at home with your laptop,” he explains, “and so dudes are recording guitars, but they’re really playing it on a keyboard through a plugin and whatever. Whereas we used to kind of slave over putting the microphone in just the right spot and hanging blankets over the cabinet and setting up tunnels and just trying to find that guitar tone. And miking the drums through a live PA and then miking that PA to try to get this crazy drum sound.”

“And it’s probably one of the reasons why, when you hear a new Foo Fighters song on the radio, it doesn’t sound like anything different than the Foos haven’t already done,” he continues. “But it sounds different than everything else on the radio because you know they were in there doing exactly that. They were finding that snare sound, and you know they were tweaking amps and borrowing shit and doing whatever they could to try to make a rock album. And I think we’ll get back to that.”

“My prediction, just like the rock band prediction, but this Beatles documentary [Pete Jackson’s Get Back] is going to revive people’s passion for recording and finding the right sound and the right song,” says Jeremy. “I think that’s going to be a somewhat of a game-changer, that documentary because people are going to want to make live records again and get in a room together again with stuff plugged in and mic’d up and all that.”

Lit will also find themselves benefiting from a documentary. Over the four episodes of My Own Worst Enemy, The Podcast, listeners follow the band on its journey from struggling to put gas into a beaten-up old Cadillac to writing, recording, and releasing a song that would top Billboard’s Modern Rock chart for 11 weeks. Follow-up singles “Zip-Lock,” “Miserable,” and “Lipstick and Bruises” also charted but failed to replicate the mammoth success of “My Own Worst Enemy.” The podcast also examines how the band pivoted in the face of external and internal changes, leading to relocation to Nashville and a dip into the country world. It all culminates into a revelation over how Lit – like the song the series is named after – has endured.

“We were approached about doing a documentary, and it still could wind up being that, but then the decision was made about [making it into a] podcast,” says Jeremy. “We didn’t have a whole lot to do with it. We had nothing to do with the production of it or even– I was shocked that some of the people that get interviewed on there because no one hit me up for anybody’s phone numbers. They just went out there like 60 Minutes style and just tracked everybody down.”

“It was cool to just hear it for the first time, not knowing what we were going to hear,” says Ajay. “Obviously, we got interviewed, but the most entertaining part is to hear what other people and peers have to say about the band and the song.” 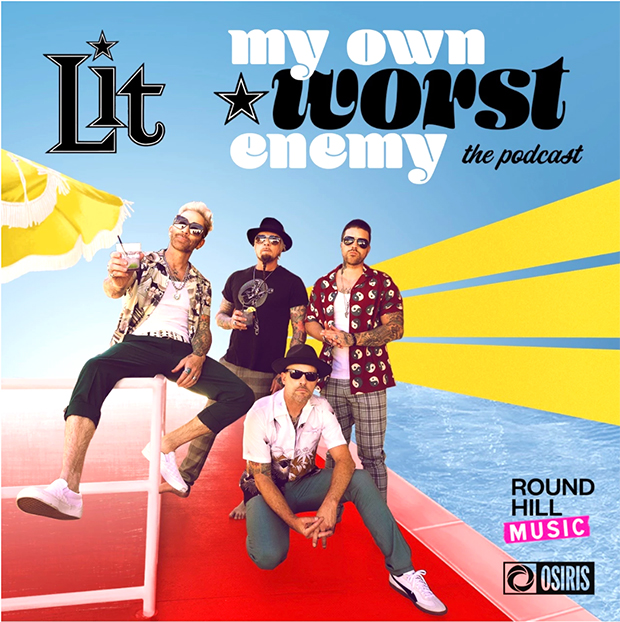 Jeremy also marveled over how My Own Worst Enemy, The Podcast chatted with Cheryl Gehbauer, head of music strategy for Harmonix, the company behind the Rock Band video game franchise. He credited the video game – Rock Band 2 came with “My Own Worst Enemy” – in helping bolster the song’s popularity. “I felt when Rock Band came out because, at the time, rock and roll started to lose guitars in it,” he says. “Rock radio stopped playing guitar-heavy bands unless it was recurrent stuff like us and The Offspring, Blink-182, whatever. But new stuff was coming out, and it was starting to get really alt-y, and almost like college rock used to sound.”

“There were no more guitars in rock and roll, and so I remember feeling really, almost hopeless. ‘Who’s going to inspire the next generation to want to get a Stratocaster for Christmas?’ Or to want to hang a poster on their wall in their bedroom? What’s going to happen?” Jeremy asks. “Then this video game comes out, and I’m like, “Oh, shit. Okay.” And when we got to be part of that, I was like, ‘This is how we bridge this gap to the next generation.'”

Lit will connect with the next generation directly with their upcoming album. The first single, “Yeah Yeah Yeah,” arrived in November, delivering three minutes of modern rock (with a splash of country cadence on the lyrics). “I think ‘Yeah Yeah Yeah’ is probably the… I mean, the whole record is much more of a rock record for sure,” says Ajay. “That’s the most balls off the wall. It was sort of like, ‘Hey. We wanted to put out a rock and wanted to let people know we’re back. Lit’s back to rocking.'”

Jeremy added that the upcoming album hopes to bring back a vibe from the ’90s, back when things were “chill” and crescent fresh. “We didn’t want to talk about viruses,” he says. “We didn’t want to talk about politics. We just wanted to make a record that you could put on and hopefully remind you of a time when we weren’t only talking about politics and viruses. Talk about chicks again. And talk about falling in love or breaking up or getting your heart broken or partying with your friends and all that stuff.”

Such attitudes defined the latter half of the ’90s, and that spirit is alive and well. At least, it is whenever someone plays “My Own Worst Enemy,” be it at a local sports game, on Rock Band, during karaoke night with your coworkers, or when a local band lights up a dive bar’s backroom with the song’s opening lick. “My Own Worst Enemy” is one of those songs that has transcended decades and will continue to endure well into the future. My Own Worst Enemy, The Podcast examines why this song caught lighting in a bottle, but Jeremy thinks the true message of the docuseries isn’t that complicated.

“It inevitably wound up being the story of four kids from Orange County who just [were] gluttons for punishment and wouldn’t take no for an answer,” he says. “And just kept fighting and fighting and fighting until, one day, they tossed us the keys to the Ferrari and just said, ‘Go have fun.'”