“If I go to New York, I’m too cold. I dropped out of school partly because it was too cold and miserable out in Boston,” Tai Verdes says. The temperature might be an odd reason to bail on higher education, but for Tai, such a career pivot is only part of his charm. The musician — who blew up in 2020 with “Stuck In The Middle” and released his debut album, TV, earlier this year – has reached this level of success by working hard but on his own call.

“There is some stuff that is inevitable that you have to do,” he says during an interview with HollywoodLife, referring to the general tasks that come with music fame, “but in terms of overall important things — I’m not making songs I don’t like. I’m writing my music. I’m promoting the way that I want to promote. I’m marketing the way that I want to market. My team is full of people that I choose because I’m curating good people. So that’s my vibe.”

The saying “still waters run deep” applies. While Tai might look like he’s taking it easy, he’s working hard at taking his career to the next level. He always has. “I always want more,” he explains. “It’s just that you should do it naturally. You shouldn’t be pushing through it. Like it shouldn’t be so hard. So I just kept going and kept trying things that I liked a lot. From the outside looking in, it looks like I’m working hard. But in reality, I’m just doing what I like all the time. I have this mentality that I want to build it as big as possible — but also, it’s fun for me, you know?”

That vibe is all over TV, expanding on the sound that made him a viral hit on TikTok. There’s the frank and infectious honesty on “DRUGS” (“Sometimes I do drugs / Not hard ones, just ones that change my mind up”), the copium-laced breakup anthem “FEELING THIS BAD NEVER FELT SO GREAT” (“Doin’ your laundry listenin’ to music / You got my hoodie but you can use it / I got six more, and they keep me warm just fine / I’m learnin’ to be with just me / Up in my head, it gets scary”), and the poignant reflection on what drive people to pursue fame in “fake prophet” (I wanna be the one that sign in signatures / My confidence needs that crutch when I’m with her / I wanna be doin’ interviews about myself / I figured out a long time ago that I need help”).

“I really love what I did on it,” Tai tells HollywoodLife. We’re talking a few weeks after TV’s release, and Tai’s pragmaticism — “I’m a business. I gave the product away. And that’s the best I could do at the time,” he says – shines, showing a maturity beyond his years, but also why he’s going to be one of the most successful artists in music history. “I love what I did on [TV]. I love the concept. I love every single track on it.  I wouldn’t have put it out into [the world] this. I loved every single part of it.”

“But,” he adds, “a part of this is moving forward to the next thing. And that’s what I’ve been doing. I’ve already started the second and third albums. I know what the cover art colors are going to be. I know the titles of them. I’m just ready for everything.”

What do these future albums hold for fans? Tai’s sound is wide and contains multitudes, and he’s unafraid of incorporating different genres – R&B, indie, pop, hip-hop – into his music. Does that mean his sequel to TV will be a pop-punk manifesto or a collection of house tracks? “I don’t know. Man, I think that I don’t want to spill any beans,” he says. “But, I feel like I’m the type of guy that’s not necessarily experimental — but I just love music.”

“So if you have a song call, ‘we would have some cute kids,'” he says, referencing track four on TV. “That’s the only song in the world called ‘we would have some cute kids.’ If you want to listen to a song like that, you got to go to my page. And that’s, that’s what excites me — making stuff that no one’s ever done before in the universe of forever.”

While the ambition to create something that “no one’s ever done before” might force a musician to start playing around with exotic instruments and random sounds, Tai knows that it’s not so much about the instruments as the person playing them. “What all these artists right now, especially ones with their own voice, are doing right now is completely original because of the times we’re living in.”

“It’s because of who I am,” says Tai. “Like, I’m a ’25-year-old guy who dropped out of college’ in 2021. You know, I’m saying there’s never been a perspective, from a 25-year-old talking about life and what it’s like to grow up in this time — their views on relationships and love and stuff like that. So, because of society changing, you know, our songs will be — even though they will like grasp on the past — they will have a different perspective.” 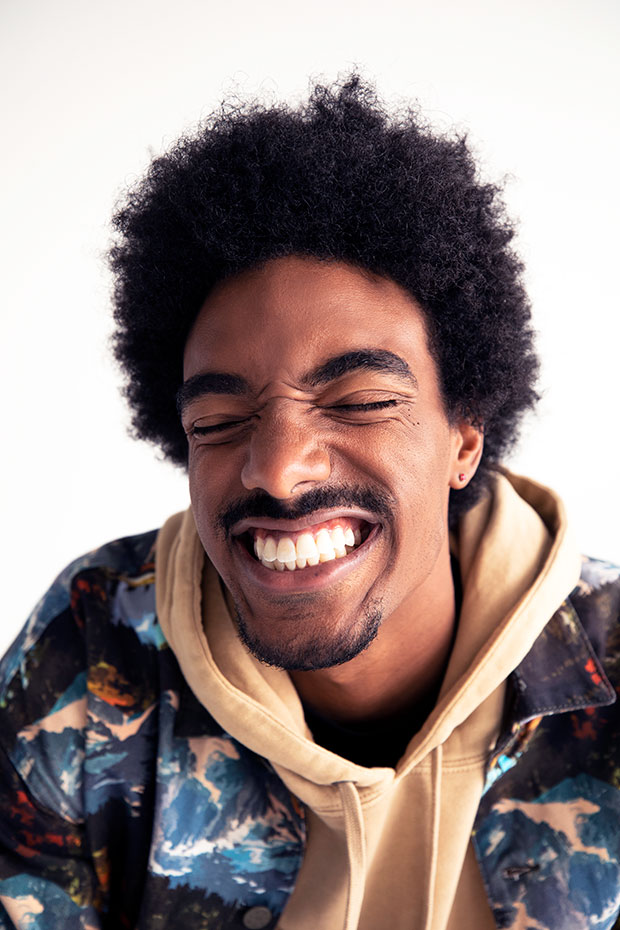 Has Tai’s perspective on fame changed since becoming famous? Before his music career took off, he had his brushes with stardom – and different goals. He wanted to play basketball professionally, but “the process of [going pro] is what I didn’t fall in love with.” Also, in that previous life, he won a televised dating program – “I just signed up for a random reality TV show and won fifty grand to live in LA for two years,” he says – and used the winnings to fund his life while he developed his music career. However, he found few opportunities. He auditioned for shows like American Idol, The Voice, and America’s Got Talent (“I wouldn’t even go past the first producer”) while working odd jobs. At the start of 2020, Tai was sleeping on a friend’s couch and working at a Verizon store. Now, he’s less than two weeks away from playing the main stage of Lollapalooza.

With nearly half a million followers on Instagram and three times that on TikTok (1.7 million as of July 2021), his life has changed dramatically in a short amount of time. But, he still keeps his feet on the ground. “My entire view of ‘fame’ is not as ‘fame,’ but as a job, as like a marketing experience.” Being famous is not Tai’s goal of being a musician, but more a part of the job of being a musician, so he doesn’t have to “work at some sort of nine-to-five job because my lifestyle doesn’t align with that.”

“You know, I think there were some points when I was really young, where I was like, ‘oh, fame.’ And then when I changed my perspective on like, what makes me happy.” But, with that said, getting recognized every once in a while is pretty cool. “I’m 6’7, so it’s hard for me to hide,” he says with a smile. “And I wear tie-dye, so I’m a huge Black guy in tie-dye.” He notes that he used to get recognized on the streets due to the dating game, but now, people know him from his music. “It’s like a whole different level of excitement when people see me,” he adds. “Every single time someone comes up to me, and it’s super genuine,  I love it. It’s wild.”

There will be plenty of these interactions before 2021 is over. Later in 2021, Tai will support Chelsea Cutler and Quinn XCII on tour before starting his headlining tour in November. It’s already sold out.

“I don’t really think about the gravity of it all – and that’s because of quarantine,” says Tai. “I haven’t done a lot of physical stuff. It’s been all through the internet. The first live show that I’m going to play is Lollapalooza if you’re barring out the random pop-ups that I’ve done. That’s the first festival I’ve ever been to. So I think that once I get to those moments, I’ll be able to realize the gravity of them.”

TV is out now.