It seems impossible to fully celebrate the immense impact of George Harrison’s music and message of peace. Still, an all-star cast set their minds to do just that by creating the first-ever official music video for his 1970 hit, “My Sweet Lord.” The video, released Wednesday (Nov. 15), begins with Mark Hamill taking a phone call. After receiving some dire news, he turns to Fred Armisen and sends him out on a mission to find…something. Fred and Vanessa Bayer begin their investigation. They’re joined by a handful of agents, each looking for something impactful – mirroring the nature of the song.

From there, they cross paths with an endless line of stars. “My Sweet Lord” features appearances by some of George’s friends and former bandmates (Ringo Starr and Leff Lynne) to fellow musicians (Joe Walsh, Reggie Watts, “Weird” Al Yankovic) to comedians (Patton Oswalt, Moshe Kasher, Natasha Leggero) to George’s wife and son, Olivia Harrison and Dhani Harrison. George himself, via some archived footage, also makes a heartwarming appearance. 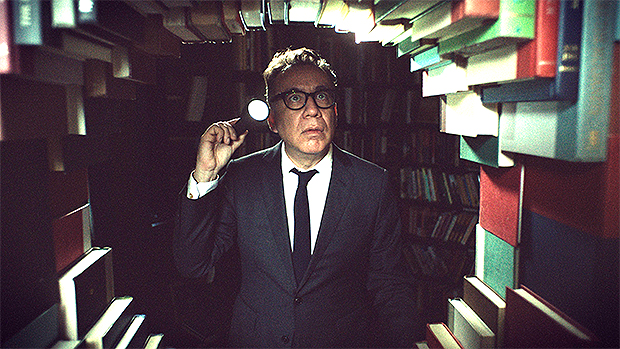 This new video continues the recent rediscovery of The Beatles’ influence on music. The group was reintroduced to a new generation courtesy of Peter Jackson’s Disney+ documentary, Get Back. Helping with this celebration is Lance Bangs, the writer and director of the “My Sweet Lord” video. Lance has previously worked on films (Jesus of Suburbia, Parking Lots) and television (Jackass). Lance has also directed music videos for such acts like Pavement (“Spit on a Stranger”), Sonic Youth (“The Diamond Sea”), Green Day (“Last Ride In”), Mike Watt (“Tied A Reed’ Round My Waist”), Screaming Females (“Hopeless”) and the Yeah Yeah Yeahs (“Isis,” “Kiss, Kiss”).

“Making this was one of the most fulfilling experiences of my life,” said Lance in a press release. “The approach was to represent the song visually while these agents and inspectors kept missing the metaphysical wonder around them. Images are choreographed to the sounds of vocal melodies, guitar strums, drum patterns, chord changes. George threaded a sense of humor through all of his videos, so we kept that spirit and filled the cast with friends and admirers of his music, many coming from the current comedy landscape.”

Lance also reveals that he shot the video on some “vintage prime lenses” from some of the films George’s HandMade Films had produced, and I hope that viewers can feel a sense of wonder and searching while they watch it, and that the song continues to add to all of our lives.” In addition to being part of The Beatles and having a legendary solo career, George founded the British film studio, HandMade Films, which helped make such iconic movies like Monty Python’s Life of Brian, Time Bandits, and Withnail and I.

“My Sweet Lord” was released from George’s album, All Things Must Past. The single was recently certified platinum, and the 50th Anniversary Uber Deluxe Edition for All Things Must Past earned a nomination for Best Boxed Or Special Limited Edition Package at the upcoming 64th Grammy Awards. Sadly, George passed away in 2001 after a battle with cancer. However, as “My Sweet Lord” proves, his influence and legacy are alive and well.