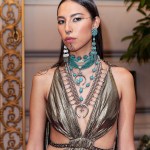 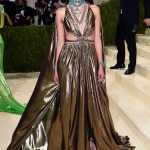 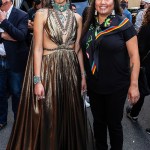 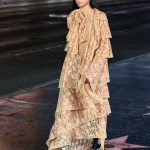 There’s a new model in town that’s taking over the fashion industry & we have everything you need to know about Quannah Chasinghorse.

Quannah Chasinghorse is quickly becoming a household name in the fashion industry and the Indigenous model graced the December 2021 digital cover of ELLE. Quannah is not only a gorgeous model, but the 19-year-old is also an advocate for the land protection of her people. Born in Alaska, Quannah has quite the story, and below, we rounded up five important things to know about the rising star.

Quannah is from Alaska and is Hän Gwich’in and Sicangu Oglala Lakota. She is a fourth-generation protector of land for the Arctic National Wildlife Refuge and her mother, Jody Potts-Joseph, has been working to protect land most of her life.

Quannah has a Yidįįłtoo, which is a face tattoo given to people in a tradition through her culture. She was given the tattoo when she was 14-years-old, by her mother. Getting the tattoo is a “right of passage” and while she could have received it when she was younger, she decided to do it later in life when she felt she was “ready to defend it,” admitting, “I knew that if people knew I got it younger, they wouldn’t have accepted me. Like, ‘A 12-year-old with a tattoo on her face?'”

3. She was the first Indigenous female model to walk for Chanel.

Since starting her career, Quannah has walked on a ton of high-fashion runways including Chloé, Savage x Fenty, Gabriela Hearst, and Prabal Gurung. However, she made history when she became the first Indigenous woman to ever walk in a Chanel show. She was so excited about walking on the runway, she Tweeted that it “made me feel comfortable, seen, and beautiful!”

4. She became an activist in 7th grade.

When Quannah was in seventh grade, she managed to influence her school to change Columbus Day to Indigenous Peoples’ Day. “It all started when I was really young,” she said. “I’ve never been that proud of being Native in my life. I was so proud to be who I was.”

5. She signed with IMG Models.