Kim Kardashian could not hold back her excitement as she shared the news that she passed her Baby Bar exam on Dec. 13. This was Kim’s fourth attempt at earning a passing score on the test, and she shared the news in all capital letters, along with a series of photos of herself looking in the mirror. “Looking in the mirror, I am really proud of the woman looking back today in the reflection,” Kim admitted. 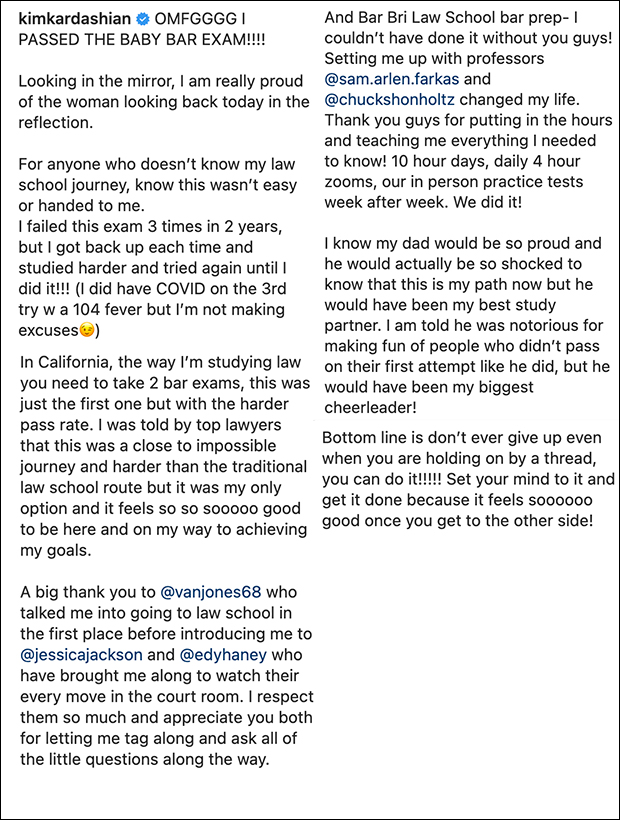 The reality star continued her caption with a summary of her law school journey. She reminisced about failing the Baby Bar “three times in two years,” and confirmed that her road to becoming a lawyer has not been “easy or hander to [her].” Kim added, “I got back up each time and studied harder and tried again until I did it!!!!” This is the first of two Bar exams that Kim will have to take in order to become a lawyer, but, as she pointed out, this one has a “harder pass rate” than the next test she will have to take.

Kim’s struggle with the Baby Bar was documented on Keeping Up With the Kardashians. On one of her attempts, she took the test while battling COVID-19 and suffering from a 104 degree fever, along with other symptoms. However, it all appears to be worth it. “I was told by top lawyers that this was a close to impossible journey and harder than the traditional law school route, but it was my only option and it feels soooo good to be here and on my way to achieving my goals,” Kim wrote.

In her message, she gave a special shoutout to Van Jones, who she said is the person who talked her into going to law school. She also mentioned Jessica Jackson and Erin Haney, who have been her mentors for years. Kim gave some love to the professors who helped tutor her, as well, and noted that they put in “10 hour days, daily 4 hour zooms and in-person practice tests week after week” to help her prepare.

“I know my dad would be so proud and he would actually be so shocked to know that this is my path now,” Kim concluded. “But he would have been my best study partner. I am told he was notorious for making fun of people who didn’t pass on their first attempt like he did, but he would have been my biggest cheerleader! Bottom line is don’t ever give up even when you are holding on by a thread, you can do it!!!!! Set your mind to it and get it done because it feels soooo good once you get to the other side!” Keep in mind, Kim did all of this while maintaining the rest of her busy schedule AND raising four kids!

Kim’s journey to become a lawyer began with her involvement in prison reform. She eventually decided that she wanted to take her work a step further and become a full-fledged attorney who could help those who have been wronged by the criminal justice system. Now, she’s one step closer!