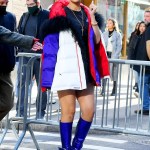 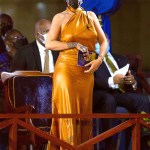 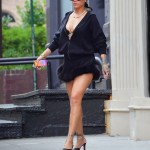 ‘Forbes’ magazine released its list for ‘The World’s 100 Most Powerful Women’ of 2021 and it included a variety of impressive ladies who have made an undeniable impact in the spotlight and/or behind the scenes.

Forbes proved women are more powerful than ever on Dec. 8, when they released their “World’s 100 Most Powerful Women” of 2021 list. The list showcased many familiar faces such as Rihanna, Taylor Swift, and Beyonce, as well as some women who are out of the spotlight but still working and changing the world just as much. From singers to actresses to talk show hosts to media company moguls, the outlet made some incredible choices and we’re taking a look at a few along with the reasons they made the list.

The choice of Rihanna comes as no surprise when you think back at what an amazing year she’s had. The “Umbrella” crooner, who came in at No. 68, runs her own cosmetics line, Fenty Beauty, and it helped her make history by becoming the richest female musician on the planet, with a net worth of $1.7 billion. She also runs the lingerie brand, Savage X Fenty, and a skincare brand, Fenty Skin.

Taylor, who came in at No. 78, has also had a very busy and successful 2021. The talented songwriter started the year re-recording and re-releasing two of her previous six studio albums in order to fully own her own music, and it’s proved to be a delight to her fans. After re-releasing her 2008 album Fearless and renaming it Fearless (Taylor’s Version) in Apr., as well as re-releasing her 2012 album Red and renaming it Red (Taylor’s Version) in Nov., she’s proving “out with the old tunes and in with the revamped (and more experienced) tunes” is where it’s at. Her re-releases are actually doing better than the originals, which is truly impressive, and is an awesome reflection of how devoted the “Swifties” are.

Beyonce is another artist who’s been named one of the most powerful women of 2021 and her track record backs the choice up. She became the most decorated female artist in Grammys history when she won Best R&B Performance for “Black Parade,” Best Rap Song and Best Rap Performance for her feature on the “Savage” remix, and Best Music Video for “Brown Skin Girl” at the Grammys ceremony earlier this year. She is on the list at No. 76.

Another notable woman included on Forbes’ World’s Most Powerful Women list is Oprah Winfrey, who came in at No. 23. Nine months ago, the former talk show host sat down with Prince Harry and Meghan Markle for a shocking tell-all interview about their life in the Royal Family as the Duke and Duchess of Sussex, and why they decided to step down from their royal duties and move from England to America.