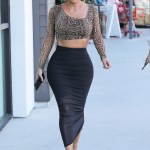 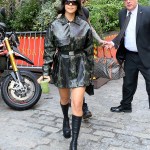 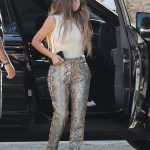 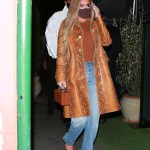 It’s an animal print Wednesday for Kourtney Kardashian, who shared new photos in a snakeskin bustier top on Instagram on Dec. 1. The Poosh founder, 42, wore a red and black print in the snapshots documenting her glam.

The selfies come after the reality TV star, who got engaged to Travis Barker in October, shut down pregnancy rumors, which has seemingly become a daily ritual. After she shared a series of bikini photos in a pool on Instagram on Tuesday, a follower inquired in the comments section: “Not to be that girl but… is that a preg belly?” Kourtney responded, ““Are we really gonna do this every time I post a photo?”

The Poosh founder is already mom to children Mason, 11, Penelope, 9, and Reign, 6, whom she shares with ex-boyfriend Scott Disick. Her upcoming nuptials to Travis, 46, will mark her first marriage and the Blink-182 drummer’s third. He was previously married to Melissa Kennedy and Shanna Moakler.

The musician is also a father to children Landon, 18, and Alabama, 15, with ex-wife Shanna. Ahead of the wedding, a source revealed exclusively to HollywoodLife that the couple’s children will very much be involved in the wedding party. “All of Kourtney’s children and both of Travis’ are going to be included in their wedding party as this is what they both want,” the source said. “Kourtney and Travis are digging their blended family.”

The source continued, “Kourtney has developed a bond with Travis’ kids and is starting to treat them like her own.” The source added that the “love goes both ways,” noting that Landon has “become a role model to Kourtney’s boys” while Alabama has “already become a big sister figure to Penelope.”

A separate source noted that Travis’ children have known Kourtney and her family for years, as the longtime friends grew up in the same neighborhood. “It really wasn’t their relationship [that] brought Kourtney and his kids closer; it’s the fact that it gradually happened over time, which makes it all that more authentic and organic,” the source said, adding, “The connection was mutual.”