Sadness is not a term generally associated with The Darkness. Since the group’s debut – 2003’s dynamic Permission To Land, which boasts “I Believe In A Thing Called Love,” the song that’s now stuck in your head – the group has always championed the energetic and explosive power of rock. Yet, if there was a band that deserved to be sour over the COVID-19 pandemic, it’s them. “It sucked because we were [touring] in Australia,” bassist Frankie Poullain tells HollywoodLife, ahead of the release of Motorheart. The band released their sixth album, Easter Is Cancelled, in October 2019 and was performing Down Under when the first wave hit. After canceling shows out of public safety, the group flew through Asia — “the Singapore airport was already the most-infected place on earth,” says Frankie – to make it home, safe and sound.

Then, the rest of 2020 happened. Or didn’t, with no live music anywhere. “It’s a shame that our American fans didn’t see it because it really was a great tour,” said Frankie, who co-founded the band alongside brothers Justin Hawkins (vocals) and Dan Hawkins (guitar). Drummer Rufus Tiger Taylor has been with the group since 2015. “We called it a concept album really because it was based on something a little bit abstract, by our standards anyway. Normally we never really dip our toe and that kind of thing. It was the most thought-out album that we’ve done. Normally our albums are very instinctual.”

“But the strange thing about it is that the title came from an accidental phrase,” he shares, “which our manager used. Two years ago, he was talking about, ‘Oh, it looks like Easter’s going to be canceled,’ because we had a tour scheduled for The States. And then, none of us have heard that phrase before, ‘Easter is canceled.’ And then Justin replied with an image that he found on the internet.” The image, a muscular Jesus Christ breaking the cross, would inspire the artwork for the album.

“Fast forward a year later, The Sun, the biggest newspaper in this country, had a big headline, ‘Easter is Canceled.’ And it was nothing to do with us,” Frankie says. “It was just talking about the fact that the pandemic had canceled Easter for everyone. So a lot of our fans were talking about our gifts of prophecy.

“That means that, perhaps in a year’s time, if that happens with ‘Motorheart’ as a headline, it means that they’ll finally have created the first sexbot – or, the first good one,” he continued. That sort of joyful – and somewhat dark – humor that’s woven throughout Motorheart, The Darkness’s new album (out Friday, Nov. 19). Opening with “Welcome Tae Glasgae,” that celebrates how “the women are GORGEOUS, and the food is …okay,” Motorheart then dives headfirst into the stars. “It’s Love, Jim” is a Star Trek­-inspired ode to alien love. The title track is about “literally a love machine,” as Justin wails on the track.

One doesn’t need to dig deep to find the gold on Motorheart. Songs like “The Power and the Glory of Love,” “Sticky Situations,” and “Nobody Can See Me Cry” are straightforward pure rock. Motorheart vibrates on a frequency that broadcasts directly to the brain’s pleasure centers, providing a fantastic experience that is at its heart, sheer fun.

Related: Chanté Adams: 5 Things To Know About The Breakout ‘A League Of Their Own’ Star

“We wanted to do something that wasn’t thought-out, and we certainly didn’t want to reference the pandemic or go all introspective and feel sorry for ourselves,” says Frankie. “We realized that our job was to do something gutsy, instinctive, hopefully amusing — sexy, maybe? And yeah, the thing about Easter Is Canceled, it was also a breakup album. Whereas, this is an album where Justin is not breaking up anymore, so he’s reaching out and having a lot more fun, shall we say?”

This isn’t to say that the new album rejects intellectualism in music. The Darkness might be more on an enlightened path than what people give them credit for. “Sometimes, there are times when it’s useful to think, but not too much,” says Frankie, before pulling out a copy of The Mysticism of Sound and Music: The Sufi Teaching of Hazrat Khan. “He talks about how too much reason and thought in music is a bad thing. You have to keep the initial flame burning and full of the heart, et cetera, et cetera, and variations in that theme.” 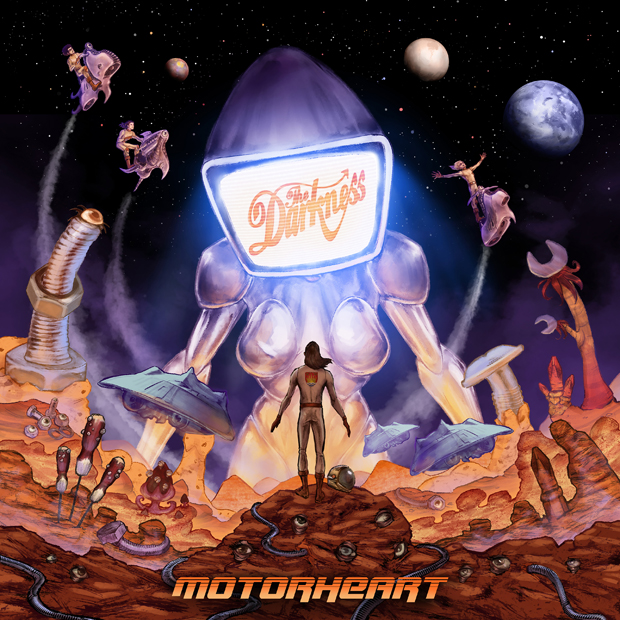 “Justin manages to deal without even thinking at all,” he continues. “That’s what makes him a great frontman at gigs because he’ll tune into the energy of the crowd. And his intuition is uncanny. He’ll pick out the right person. I guess, what the French would say is, he follows his nose. And that represents the instincts that Western man had, and still lie within us, but largely dormant in most people.”

Going beyond the human experience is second nature for The Darkness. The band has never shied away from incorporating fantastical elements into their music. But, was it easier to write songs about sexbots and alien love affairs while locked inside your home due to a global pandemic? “[It was] definitely more fun,” says Frankie. “And in terms of sci-fi, escapism and also the escapism for us too. Being in a touring band, you have a lot of time to kill, so humor obviously is the number one ingredient that helps time pass in a pleasant way. And retro sci-fi, we’ve always felt a strong affection for that. We do reference it quite regularly, but there’s probably more on this album than anything else.”

That fun has been captured in the videos from Motorheart. There’s the time-traveling adventure in “Jussy’s Girl” and the Ingmar Bergman-esque “It’s Love, Jim.” Even the band’s lyric videos are fun, even when it looks like they’re not having a great time. For “Nobody Can See Me Cry,” Justin, Dan, Rufus, and Frankie teargassed themselves – at least, that’s how it looks.

“That’s just normal dry ice,” said Frankie. “What we did is — we were actually shooting two videos, two proper videos during a three-day time period in my village here. I produced the videos and wrote them with an Italian filmmaker friend of mine. And that’s for two different songs, ‘Jussy’s Girl’ and [It’s Love, Jim]. But on the last day, our manager said, ‘You have to do a lyric video for “Nobody Can See Me Cry.” ‘ And we said okay, we’ll do it at the end of the day. We just had a little bit of daylight left –literally had 10 minutes — and we did it in one take. And we still had the makeup on from this other video we’ve done, where we had this white makeup on because we were doing a black and white video for ‘Jussy’s Girl,’ kind of Charlie Chaplain style makeup.”

“I guess we all did it differently,” he adds. “Dan went all out. He just went straight into like heavy, heavy crying. Justin was a bit more of a bubbling kind of thing. Rufus was quite interesting. I was very impressed with his one; he is probably the most convincing. The most elegant, I think. He was the most elegant crier. And mine was, I guess, perhaps a little bit too stoic. That’s probably because of my Scottish blood.”

Though his blood may make him stoic, Frankie promises electricity when The Darkness returns to the road. “We’re going to get to rehearsal and take it, but it’s definitely going to be stripped back a little bit,” he says. It’s a good opportunity to do something completely different from the last time. It’s going to be less controlled, hopefully, more anarchic and more instinctual.” And fun. Not sad. Fun. And if all goes well, sexy. Why not?