Justin Bieber and Hailey Baldwin pulled out all the stops for their latest Halloween costume, dressing like characters from the ‘Jungle Book’. See the pics!

Hailey Baldwin, 25, and Justin Bieber, 27, stepped out at Vas Morgan and Michael Braun’s Halloween party in Los Angeles on October 30, and the A-list couple totally killed the fashion game. The singer cut a casual figure in a comfy bear onesie, which he paired with layered, chunky silver chains and a pair of pink and white sneakers. While he was dressed as Baloo from the Jungle Book, his supermodel wife stayed on theme as the film’s black panther Bagheera.

She wore a leather trench coat, a black wig, and towering platform sneakers, as she donned a pair of cat ears. Justin also took to his Instagram page to share a blurry selfie. “It’s the bear necessities of life,” he wrote, referencing the iconic song from the Disney film. The couple’s latest outing comes just days after Hailey issued a statement about the tragic and accidental shooting on the set of Alec Baldwin‘s movie Rust.

Hailey, who is the daughter of Alec’s brother, Stephen Baldwin, shared a statement to Instagram on Friday, Oct. 22, revealing she was “devastated.” “Sending all my love to the family of Halyna Hutchins. This is a truly unimaginable and devastating tragedy,” she wrote via her Instagram stories. “My thoughts are also with Joel Souza as he recovers. I am absolutely heartbroken for everyone involved,” she added. 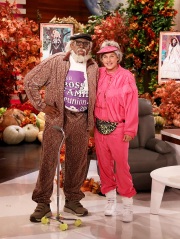 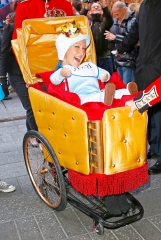 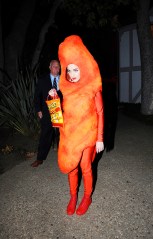 Earlier in the day, Hailey’s uncle Alec addressed the media in Manchester, Vermont, where he and his family have been staying since the tragic incident in New Mexico. “It’s an active investigation in terms of a woman died, she was my friend,” Alec told reporters. “We were a very, very well-oiled crew shooting a film together, and then this horrible event happened,” he continued.