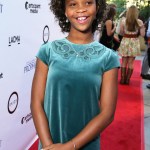 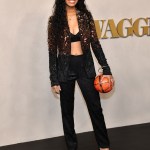 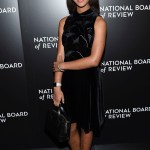 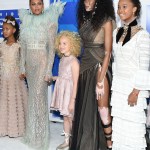 The youngest Oscar nominee for Best Actress in history, Quvenzhane Wallis, looked absolutely incredible on the ‘Swagger’ premiere red carpet in a pantsuit.

It’s been a while since we’ve seen Quvenzhane Wallis, 18, but she finally made a rare red carpet appearance at the premiere of her new Apple TV+ series, Swagger, in New York City on Oct. 26. For the premiere, Quvenzhane opted to wear a metallic black leopard print pantsuit that put her toned abs on display.

Quvenzhane rocked a tiny black plunging V-neck bralette with a pair of fitted mid-rise black trousers. Her taut tummy was the star of the outfit, as was her diamond belly ring. On top of the crop top, she rocked a matching animal print blazer that was covered in bronze sequin details and was kept unbuttoned.

Quvenzhane accessorized her power suit with a cool, bright orange basketball shape purse that was covered in crystals and a pair of sky-high, black ankle-strap sandals.

Quvenzhane is most famous for being nominated as Best Actress at the Oscars for her role in the film, Beasts of the Southern Wild, when she was just nine years old, making her the youngest actress to ever be nominated in that category at the Oscars.

Although Quvenzhane hasn’t made a red carpet appearance in quite some time, she was recently the talk of the town because tweets from Chrissy Teigen resurfaced from 2013. Chrissy bashed Quvenzhane on social media writing, “Is it okay to call a small child cocky?” in regard to Quvenzhane.

Chrissy then tweeted, “I am forced to like Quvenzhané Wallis because she’s a child right? Okay fine.” After fans of Quvenzhane clapped back, Chrissy deleted the tweets.