Eric Trump got viciously mocked for criticizing President Joe Biden over spending time at his Delaware home, as voters reminded Eric how his father spent nearly 150 days at Mar-a-Lago.

Irony might be dead, and Eric Trump is the one holding the murder weapon. The youngest son of Donald Trump stopped by Fox News’ Hannity on Monday (Oct. 18), and during the visit, Eric, 37, tried to talk smack about President Joe Biden while discussing the current supply chain crisis, per Newsweek. “The other thing that really bothers me, Sean [Hannity], about this situation is, where is everybody during this crisis? Every crisis that Biden has and every single day, there’s another one, whether it be Afghanistan or the border, right, the leaders leave. … When Afghanistan is falling, guess what? You have President Biden who is in Delaware not solving that problem.”

Eric Trump criticizes Joe Biden for spending time at his personal property instead of the White House. Irony is deader than dead. pic.twitter.com/p0EDnZ825D

Eric Trump says Presidents shouldn't spend their time at their personal properties. So is his father going to pay back the millions of dollars for going to Mar A Lago?

“Eric Trump criticizes Joe Biden for spending time at his personal property instead of the White House. Irony is deader than dead,” tweeted journalist Aaron Rupar. “Imagine walking through life like Eric Trump. I can’t imagine self-reflection is a huge part of his day,” added writer Bryan Behar. “If ignorance is bliss, Eric Trump is the happiest person EVER,” tweeted one user. “Intellectually Dishonest,” tweeted another. “Trump spent half his term at Mar-a-Lago or his other golf courses, while also charging the Secret Service for their stays….now check Eric Trump’s brain fart.”

Wasn’t Mar-A-Lago where mr. trump hung out for days at a time. Isn’t that Mr Trumps residency? Where was Eric Trump when dad stayed home? https://t.co/CzniLovK0M

Eric Trump is criticizing Biden for being away from the White House during a crisis. Does this Trump scion know what irony is? I've lost track of the number of times his father was away golfing at Bedminster et al. or hanging out at Mar-a-Lago during first year of COVID-19.

Donald, 75, visited a Trump Organization property on 428 days of his presidency, or one visit every 3.4 days, according to the Washington Post. That means he visited one of his properties about two days every week of his presidency. Those were usually weekend days, and according to the Post, he was president for 418 weekend days. The twice-impeached, one-term president visited one of his properties on 240 of those weekend days or roughly 57%. Trump spent most of his time at Mar-a-Lago, about 142 days over 32 visits. He also spent 106 days at his private club in Bedminster, New Jersey. 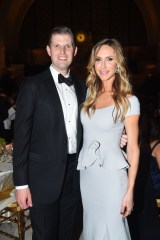 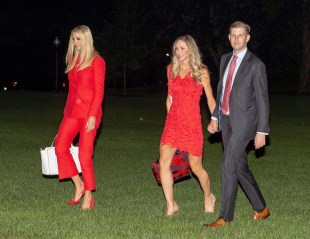 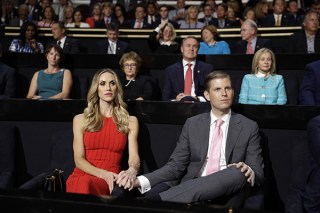 Donald also likely played anywhere from 260 to 300 rounds of golf (the Washington Post estimates 261, while TrumpGolfCount.com lists the number at 298.) Trump famously criticized President Barack Obama for his golf habit. “I think he’s played 300 rounds of golf or something like that, more than 300,” he said in September 2016. “That’s more golf than many members on the PGA Tour. Okay?” Trump vowed to voters that if elected, he’d be too busy “working for you” and wouldn’t “have time to go play golf.”

Trump somehow found the time two weeks into his presidency, playing his first round in February 2017. Obama, it should be noted, played 333 rounds of golf over two terms as president, about once every 8.8 days. Compared to the Washington Post’s conservative estimate, Trump played a round of golf every 5.6 days.